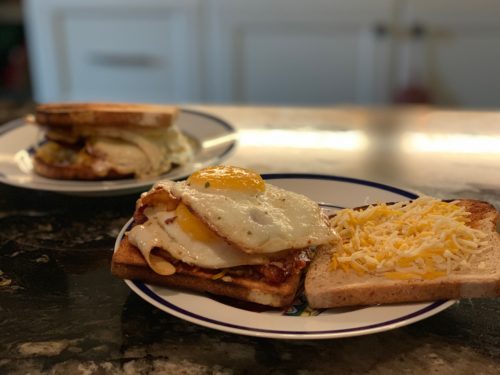 It was just a simple sandwich. He was a simple man. He was kind-hearted and quiet, he is what many would call ‘the salt of the earth’. That was my paternal Grandfather, Nunzio Alioto. He was always there with a smile and a helping hand for family or someone in need. He to me was the embodiment of all the good lessons that modern day religion can offer us.

Today, I made a breakfast sandwich. As I stood over the stove, I smiled as I thought of him. Every Sunday he would do the cooking. These are the stories that I recalled hearing from my mother and my Aunt. Upon returning from college I moved into my Grandparents’ small in-law unit basement apartment, and then I experienced the legacy of his Sunday meals with my own eyes.

For Pops, Sunday mornings were about the breakfast sandwich, crisp bacon or ham or prosciutto, eggs cooked sunny side up in the same pan to collect all of the salty meat juices. Then, lightly toasted pieces of bread were effortlessly prepared with a slice of cheddar or swiss cheese adorning at least one side of the bread. Crisp meat was added to the cheese toast and then sizzling eggs, lightly basted in the juices and sprinkled with salt and pepper. The eggs were gently plopped on top of the sandwich, and the closing slice of toast was placed ever so gently on top, to complete the Sunday treat.

Today I made just that sandwich and as Secondo commented on how delicious it was, I started to tell him about my Grandfather. Somehow tears jumped out of my eyes as I recalled those special stories about him that I hadn’t visited in so long. For example, he was very upset with me that I had postponed the baptism of his first great-grandchild, Prima. His health was failing and in his devout religious practice, he was insistent that I christen her as soon as possible. It was important to him. I was torn because I also wanted her paternal Grandfather to make it to the services. We needed to hold for him to get a date off of work so we could all celebrate Prima together. At last, the church date was set, parental classes were completed and the party regalia was organized. My Grandfather was like a jubilant child. I was off of the ‘you are in trouble list’ and then, the night before the big event he was admitted into the hospital; he commented to my mother that he was very pleased about Gabriella’s baptism and while he wouldn’t make it to the church he would be with her in spirit.

He passed away the next morning. I was devasted. We were devasted. He wasn’t someone that inflicted guilt, he just wasn’t like that. But how could I go smile and celebrate the baptism when I only wanted to be with my family, as they soothed each other in this deep loss? My mom insisted that I continue with the plan, he would have wanted this, so we did. There was a tremendous amount of love and support from the family that made it to the church and party that day. And I undeniably felt his presence. We found our smiles and laughter after all. That day, we honored his passion for religion. He is probably the single most person that personifies the goodness of religion for me. 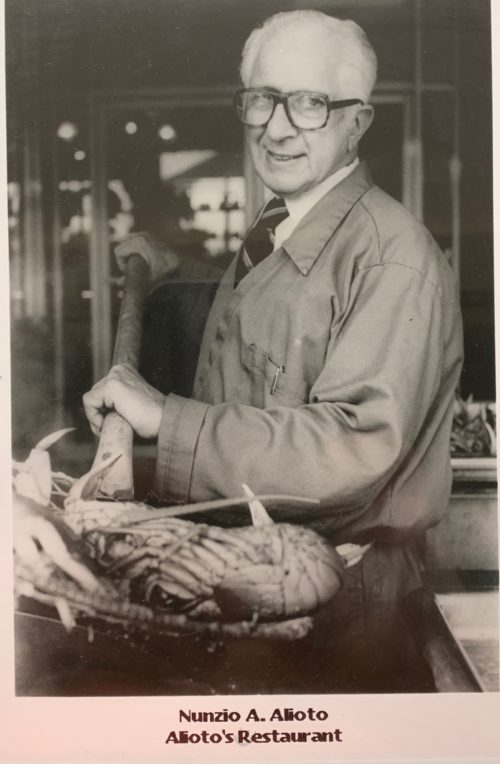 I then shared with Secondo, another Pops ritual that I watched first hand on many a morning, well before sunrise, as I headed off to my 5-9 a.m. shift at United Airlines. Pops was also up very early in the morning. He opened up the restaurant and prepared things for sale at the crab stand. So, most mornings I would come up to his flat at some unspeakable hour, and we’d sit together for breakfast. I say sit together because there was not much talking that took place between us after he greeted me and smiled. He just couldn’t talk. In front of him were at least four stacks of baseball cards rubber banded together. I have no idea how many cards were in each stack but suffice to stay it was A LOT. These cards were actually not baseball or other trading cards. These were prayer cards from services he had attended over the years for family and friends. These cards were his link to the afterworld. Every morning these cards would be set out in meticulous rows, in their designated batches, and the ritual would begin. He would reach this meditative state and pray for all those that had gone before him, he would remember them and an aspect of their souls that he found interesting, then he would wrap them all back up, place them on his armoire in his bedroom until the arrival of the next new day.

The last story I will share for now about Pops is one that has stuck with me all of my life. It has become a guiding principle. I’ve spoken about it before but for me, it deserves to be in this post as well.

One morning I was off of work, he was a bit under the weather and the person scheduled to help him was out of town, so my Grandmother asked if I might go in for a few hours to help him get set-up. She always worried about him and didn’t want him to do too much. Much to his dismay, I joined him. He kept insisting that he wanted me to rest on my day off, but knowing that my Grandmother had asked this of me in confidence, I pushed and said I wanted to learn more about his day to day life and the work he does at our restaurant. He relented and off we went. When we arrived at the restaurant it was still dark out. In the shadows, I saw a small group of people milling about. I was worried. Was this normal? I asked him, “Pops there seem to be some people lurking around. Should we stay in our car until they have moved along? Should we call the police?” He assured me that these were some of his friends. They are homeless but not harmful. He then explained that he would meet them there every morning to feed them. I was shocked and nervous. We exited the car on his command, and he proceeded to introduce me to each of them. I nervously smiled and said hello. He then asked them what he could make for them to eat today? Each order was given to him with specific directions. When we got inside the prep kitchen, Pops then asked for my help in preparing their food.

I asked him why he would take their order every day as they must certainly be happy to have a meal of any sort, at his discretion. He then turned to me and explained in his gentle and loving way, “Gina, just because someone is poor doesn’t mean that they don’t enjoy nice things or being treated like everyone else. Being poor or homeless is not a crime.” He was right. I had never thought of it in those terms. I was touched and humbled. When I reached this part of my story to Secondo, the beauty and truth of Pops’ words and his true goodness as a human struck me. Tears sprang out of my eyes. Secondo looked at me, hugged me and said, “Mom, he gave them back their dignity. He made them feel good.” Again, such simple words. Simple truth. Pops was truly a good and kind soul.

I was at a meeting last week for Secondo, to learn about what was needed of him to fulfill his high school Christian Service community hours. They shared a quote that inspired me and must have also summoned these memories of Pops. “The world does not need what you have but who you are.” That was him. Lover of the Anawim- the marginalized.

In this month of love (February), how do you want to be remembered? How can you show your love towards others? They say that they don’t read your resume at your funeral, but they will talk about the person that you were and the impact you made on others.

There is no real recipe here in this post, beyond a recipe for kindness. Be kind to one another. Treat others with dignity. And of course, never underestimate the power of the simple breakfast sandwich or the impact you can make on the world around you.

In a large pan over medium-low heat, cook your meat of choice, turn once, and cook until crisp. Remove from pan and set aside. Toast two slices of bread (either in a toaster or in the oven) and while still hot, place cheese on it to slightly melt it. The eggs can be cooked in the same pan that you cooked the meat. If more grease is needed, add 1 tsp of butter. Salt and pepper eggs and cook until the desired yolk firmness is reached.

To assemble the sandwich, place the crisp mean and eggs on top of cheese and toast and cover with the remaining piece of bread. Enjoy!