When my first child went to pre-school I recall being perplexed when we were told that our children were going to be making Stone Soup. As someone who can typically find their way around the kitchen, and enjoys trying new recipes, I have to confess, this concept did not excite me.

Yet the lore of the story is about making something from nothing. A good-tasting soup, beginning with a stone and boiling water, becomes a fabulous soup with the addition of a little bit of this and that. At heart, the traditional story is a trickster tale. Typically, the person starting the soup is a beggar who is denied the food he requests from someone living in a house. In many versions, including in the American Civil War version, the beggar is a soldier looking for food. For the original version of how to make this soup, you’ll have to read to the end of the post, for those in the hurry I will share with you my very very favorite version of Stone Soup, named such because the person who taught me this recipe is named Colbi Stone. Read on, it will not disappoint you. Try it as a breakfast, snack or dessert and I promise you’ll be hooked before you can say Supercalifragilisticexpialidocious. 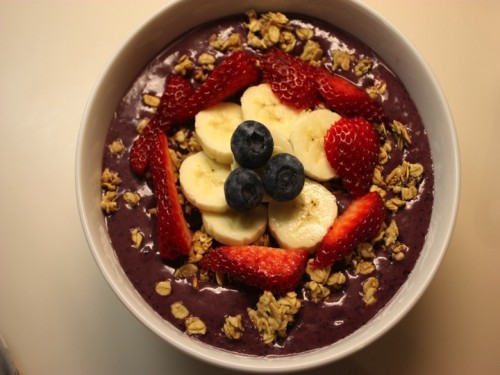 All ingredients can be found at Whole Foods. There are two kinds of Acai smoothie packs, you want the original Rio Blend. The brand I used was Sambazon. They are sold in the freezer section in four packs.

Note: for my version I used granola with chocolate chips- why? Because I love the flavor of chocolate and berries commingled. 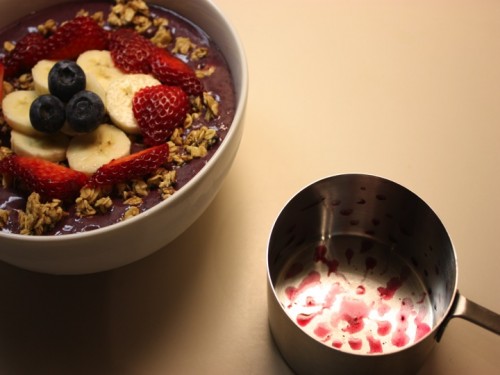 Back to my previous story of pre-school Stone Soup cookery….
The day before the big meal, the teachers asked each student to bring in a vegetable to share and the teacher brought in a pot and one very clean, scrubbed, river stone. With the stage set, the story was read. 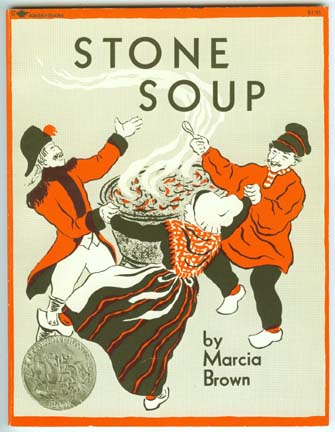 The Story of Stone Soup

Once upon a time, somewhere in post-war Eastern Europe, there was a great famine in which people jealously hoarded whatever food they could find, hiding it even from their friends and neighbors. One day a wandering soldier came into a village and began asking questions as if he planned to stay for the night.

“There’s not a bite to eat in the whole province,” he was told. “Better keep moving on.”

“Oh, I have everything I need,” he said. “In fact, I was thinking of making some stone soup to share with all of you.” He pulled an iron cauldron from his wagon, filled it with water, and built a fire under it. Then, with great ceremony, he drew an ordinary-looking stone from a velvet bag and dropped it into the water.

By now, hearing the rumor of food, most of the villagers had come to the square or watched from their windows. As the soldier sniffed the “broth” and licked his lips in anticipation, hunger began to overcome their skepticism.

“Ahh,” the soldier said to himself rather loudly, “I do like a tasty stone soup. Of course, stone soup with cabbage — that’s hard to beat.”

Soon a villager approached hesitantly, holding a cabbage he’d retrieved from its hiding place, and added it to the pot. “Capital!” cried the soldier. “You know, I once had stone soup with cabbage and a bit of salt beef as well, and it was fit for a king.”

The village butcher managed to find some salt beef . . . and so it went, through potatoes, onions, carrots, mushrooms, and so on, until there was indeed a delicious meal for all. The villagers offered the soldier a great deal of money for the magic stone, but he refused to sell and traveled on the next day. The moral is that by working together, with everyone contributing what they can, a greater good is achieved.

For those of you who are feeling adventurous, I would HIGHLY recommend this version of Stone Soup.

One Reply to “Stone Soup”