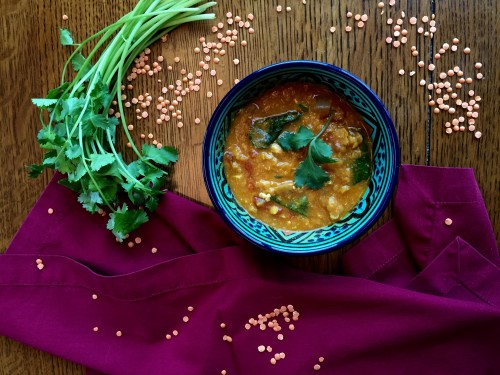 Life has a funny way of boosting you up when you least expect it. And that in itself is inspiring. While this was not the recipe I anticipated posting this week, I couldn’t resist. And on this day of Hearts I wanted to share the LOVE.

Last week I had noticed that a new friend of mine, Judith, was listed in an email as the primary contact for our daughter’s school fundraising soup lunch and Lenten festivities. On numerous occasions over the past four months she had helped our family throughout my diagnosis, surgery and recovery. In hopes of somehow helping her, I stepped out of my ‘recovery comfort zone’ and took a bold step by offering to make a pot of lentil soup for the lunch.

When I reached out to Judith she said that the school kitchen catering staff was handling the soup fundraiser, but that our local church also had a soup dinner and perhaps I could make a pot of lentil soup for them. I’ll admit it is always more intimidating to cook for those you know, especially since I have been out of commission on the cooking front, but I took it on as I was happy to help out.

My original plan was to make my Grandmother Antoinette’s lentil soup, however when discussions started with the organizer it sounded like they already had someone signed up to make a similar soup. This got me thinking about a recipe I had scratched out a few notes on a number of months ago, and while it was not yet tested, I imagined that it could also be delicious—or a horrible failure. Risky. My other grandmother, Ginny, had once advised me that it was never wise to make a new recipe for guests. She would have said, “You don’t want to risk creating something that doesn’t turn out for an audience.” Yet, I had to contribute, even if it was a tad reckless on my part. I rationalized that since I’d thought about this recipe for a few months, I was certain it could work.

I prepared the soup the night before, since soup flavors are so much better when they have a chance to amalgamate. That night when my husband came home he was excited to smell cooking happening in the kitchen. He was somewhat less excited when I explained the soup was for the fundraising dinner and not for us. Wanting to put a smile back on his face, I asked him to please help me taste test a small bowl so that I could make any necessary adjustments before it needed to be delivered. The look on his face after his first bite? Approval. Then he went onto to say that it was delicious and he hoped I’d make another pot for us soon.

Since I wasn’t able to make it to the soup dinner, I was thrilled to receive a text the next night from Judith telling me how much the soup was enjoyed. While I had not yet had more than a spoonful of the soup while I was creating it, I had reserved a cup of the soup to allow for the family ‘taste testers’. My in-home critics are always a solid resource for me to collect additional recipe feedback and make necessary modifications. >And they are brutally honest, which is exactly what you need when trying to make a recipe that will stand up to expectations.< The next morning, I unexpectedly had more encouraging notes from Judith, as she explained that the soup received great reviews and that others would love to have the recipe. I rushed to find my hand written notes for this easy pantry recipe and typed them up. I felt a renewed excitement to create, write and share my cooking adventures. Offering to do something for others unexpectedly gave me back more than I could have ever imagined. There is no stronger message that I could share on Valentine’s Day. When you open up your heart and give to others, amazing things can happen.

I hope you will LOVE this recipe as much as I do — I am already onto my third batch.

The coconut and ginger flavors give the soup an exotic twist with a hint of spice. The subtle flavor of the red lentils and tangy tomato undertones make this hearty soup recipe robust. Throwing in some fresh greens provides a pop of color and nutrition. The added bonus is that this soup is both vegan and dairy free, without anyone wishing it was otherwise. And as we all know, every day should be spent loving those around us, so no need to save this recipe until next Valentine’s Day, make a hot pot to share with those you love. 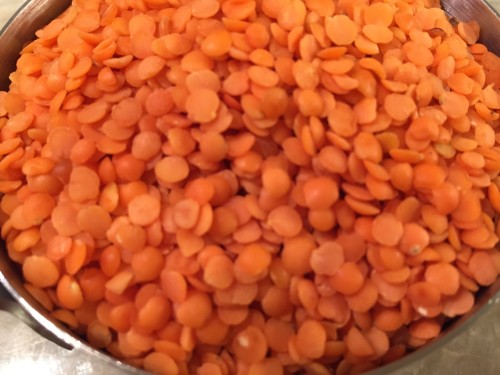 In a soup pot, heat the coconut oil over medium low heat until melted. Then add in onion, garlic and ginger a few minutes, stirring regularly, until onion is translucent. Sprinkle with salt and pepper.

Add the tomato paste and curry powder. Lower temperature to low and continue to cook until fragrant.

Next combine the vegetable broth, coconut milk, diced tomatoes and lentils. Cover and bring to a boil; simmer 20-30 minutes. Lentils should be tender.

Gently stir in chopped spinach just before serving, if using. Top with a sprig of cilantro, if using.

Notes: This soup easily adapts to what you have on hand – liquids can be replaced to change the consistency and flavors.

*Canned tomatoes can be replaced with 6 ½- 7 cups fresh tomatoes, seeds removed if possible.

*Crushed red pepper or Tabasco can be added to make this a much spicier soup.

*Diced tomatoes can be replaced with 1 cup broth will create a stronger coconut flavor.

*Coconut milk can be replaced with 1 cup of broth will give it a stronger tomato flavor.

*Replacing the diced tomatoes and coconut milk with 2 cups of broth and the spices become more prominent.

*Tomato paste can be replaced by ketchup in a pinch.

*Coconut oil can be replaced with vegetable oil or other substitute. 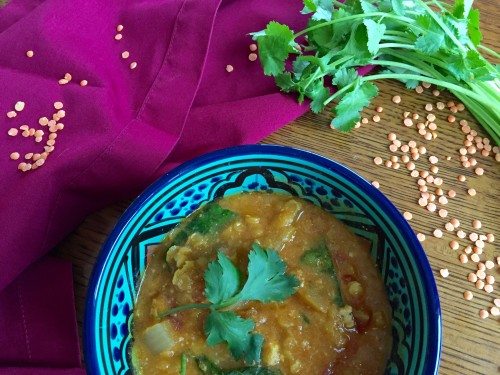