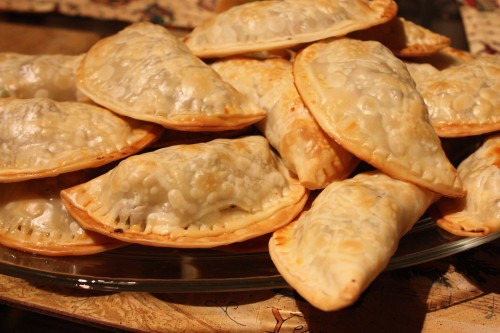 The sorted history of this stuffed pocket: The simple meat pie is thought to have originated in Cornwall, England in the 1800s. Some food historians suggest that miners, because of their poverty, may have added vegetables to stretch this dish further, since meat was too expensive. Louisa May Alcott, in her renowned book Little Women also references this meal/hand warmer option, as she notes that this meal also served the purpose of keeping the girls hands warm, that were too poor to own mittens.

The pasty (singular of ‘pastie’) is thought to be inspiration for the Spanish or Latin empanada. Empanadas differ in the addition of cumin, sometimes raisins, and occasionally are fried rather than baked. Pasties also share similarities with piroshkis, though piroshkis of Russian origin are usually covered with yeasted dough rather than a pastry crust. Perhaps this is too much foodie history? I must confess that this recipe is a true hybrid, of both the pasty and the empanada. Why? Why do I ‘go there’? Well if you want the truth, the Cornish version, in its truest form, never had the filling cooked before baking, the recipe I am about to share with you does, however the ingredients are quite simple and lacking that true empanada flair.

(Note: Be sure to read over the entire recipe as there are two ingredients lists and two sets of directions in addition to sauce suggestions.) 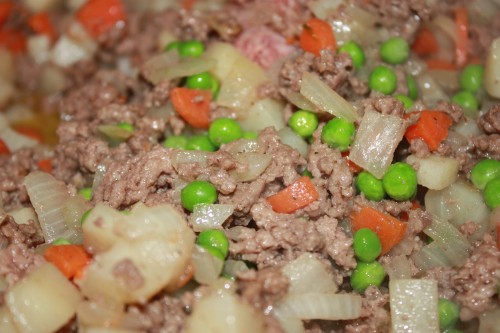 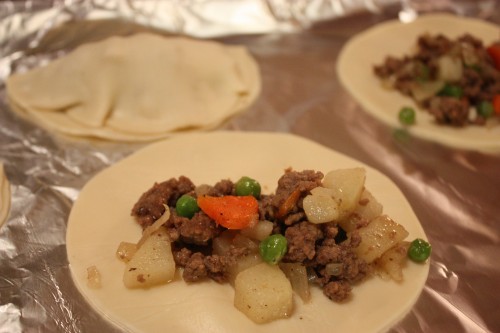 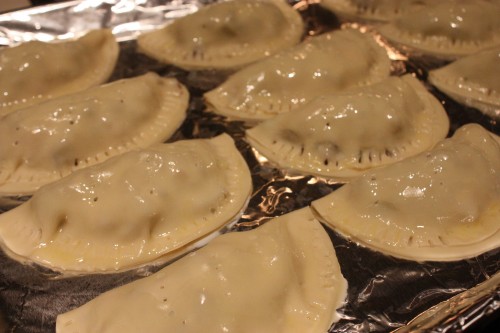 In a large-size skillet add oil, potato and salt and pepper. Cook on medium-high heat until potatoes change from a solid white to an opaque white. Then add in the carrots, cooking for 5 minutes. Add in the onions and continue to cook for 7 minutes, stirring continuously. Add in meat, breaking into small pieces. Season with salt and pepper. Turn down heat, add peas and cook until meat is no longer red; stirring well. Set aside.

With this quantity of filling I was able to make 36 pies and still had a bit of meat left over. If you are making the crust from scratch, you will want to at least triple the recipe below.

Note: If you are in a time crunch you can use pre-made pie crust cut into the designated size or the Hispanic supermarket also sells La Saltiña Tapas, which are pre-cut and ready to use. If you opt for this method, continue directions from ‘filling the crust’.

In a medium-size bowl cut butter into flour. In another bowl mix water, vinegar, and egg. Divide into 8 small balls. Using a floured board, roll out each ball into a circle that is approximately 4-inches.

Place filling in center and fold the crust over the filling until it forms a semi-circle.

Push the edges together with a fork. Poke holes in the top and brush with egg and milk mixture. Cook at 400 degrees for 35-40 minutes.