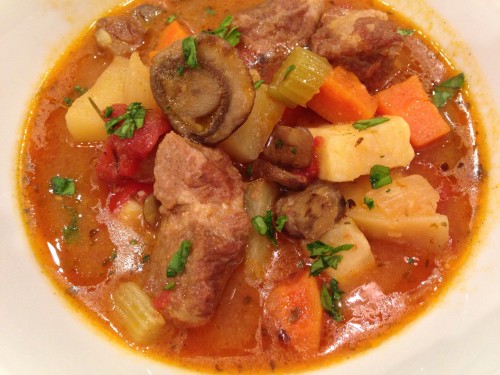 I was recently offered the opportunity to join a group of bloggers as guests of the Animal Agricultural Alliance, to tour three pig farms (Sow Farm on Prestage P12B/McDaniels Complex, Nursery Farm L&W Ammons and Finishing Farm C&C Top Hog)* in North Carolina. At a glance it seemed like an amazing opportunity, they would pay our expenses and we would enjoy the chance to learn something new. But I also knew it was a trip that would come with emotional and psychological risks. Without much hesitation, this part-time vegetarian decided it was time take her floundering vegetarianism to the limits and make a game time call on her future engagement with meat. 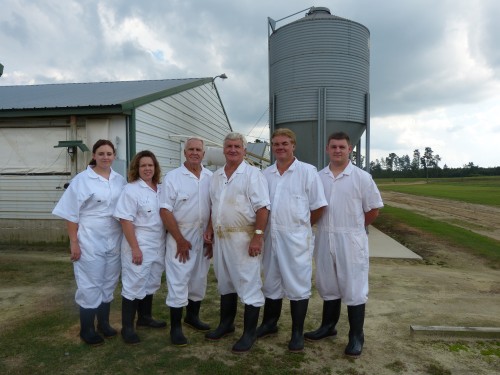 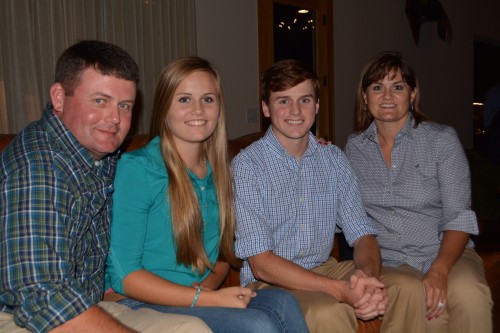 Previous exposure to the meat market in Florence, Italy during my college years had turned me into a full time vegetarian, due to its lack of sanitary standards and shocking display of carcasses and jarred entrails. I wondered if this might have a similar effect, and yet it was a gamble I was willing to take.

It has not eluded me that as I casually roll my shopping cart through various supermarket isles, or that even during visits to my local butcher, that I am seldom confronted by images of an entire lifeless animal. I know that sounds abrasive – but the bottom line is that I have lived abroad and unlike what we are exposed to in America, neatly prepared packages of meat, – our meat comes from living breathing animals. Seldom do you have that sense of reverence for the animal that provided you with that food. It is something our children are shielded from, and while it is a harsh reality, it IS REALITY for a great many. 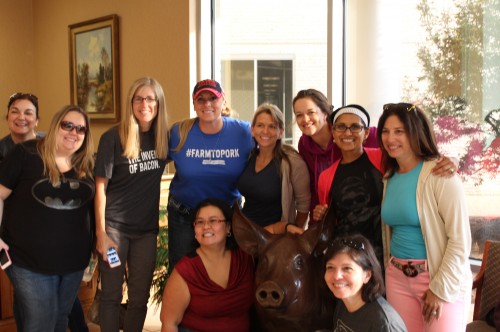 Let’s talk about exposure and transparency. I am amazed to tell you that I had both of these during my farm and farm business travels. I quickly realized that as nervous as I was about seeing a potentially unsavory side of animal farming, those that were my hosts and hostesses were nervous for me to see it too. It became apparent to me that the national pork board was about to dip their proverbial toe in the waters of influencer truth, which could potentially start to change the perception of their industry for better or for worse. While the vast majority of their farmers are not that familiar with bloggers, they too were curious and agreed to lift up the kimono. 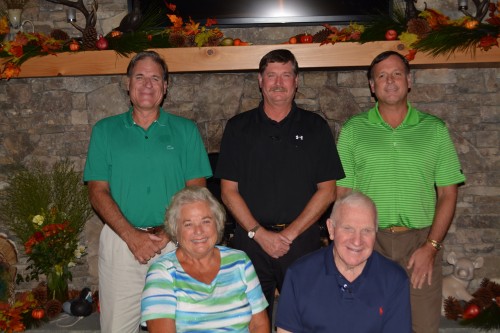 The Prestage visit took us from artificial insemination, to pregnancy, through gestation, to birth, to growth at various stages of their lives. We walked through the modern day farm with one eye turned to the future. Pork production in America is no small operation, nor is feeding and meeting the demands of America’s pork consumption.

As an American that has watched much of our trades disappear over the decades >yes, I am that old< I suddenly realized that these men and women were keeping a viable industry alive. Yes they are also business men and women, but I was confronted with a sense of good ‘ole American pride. The days of the romantic red barn are woefully passed, but the days where we rally behind our technologically-advanced environmentally-conscious animal-nurturing humble and proud farmers, has arrived. I met and spoke with this community first hand. I was inspired by their strong sense of pride, compassion for what they do, and how meticulously they ensure that the products we consume are of the highest integrity. 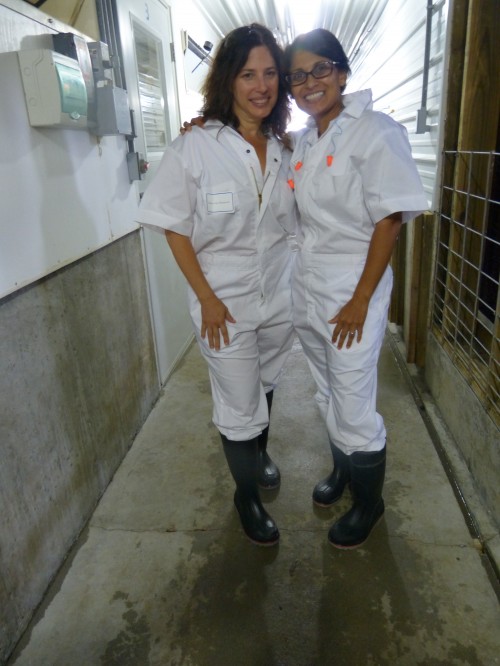 At the top of their charts is protecting the animals from disease and peril. And to that end, anyone entering the farm is required to strip and ‘shower-in’, receiving an entirely new set of clean clothes – not just coveralls. This includes bras, underwear, hair ties, socks, and boots. (When we left, we had to undergo the same process in reverse – this time putting on our original clothes). We were each given a pair of booties to cover our shoes that were to be worn to enter into the farm, left by the front door for the showering process, and then replaced upon departure. I affectionately referred to the process of turning in our booties before reboarding the bus as ‘bootie call’, much to their amusement. 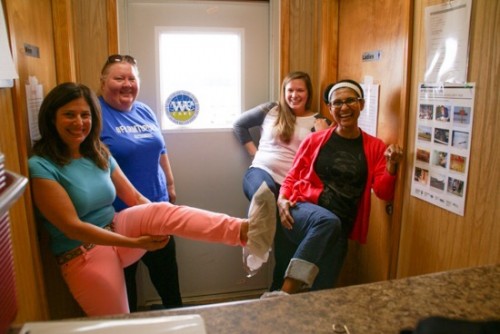 As you can imagine the pig jokes also abounded, and I am certain, our engaging group of bloggers was unlike anything they had anticipated. And yet somehow they embraced us in all of our quirkiness as we forged into topics like artificial insemination and just how they obtain the semen from the studs. Wouldn’t you love to know? And female pig anatomy was also on the conversational table. Again, another riveting topic for this rural city gal. 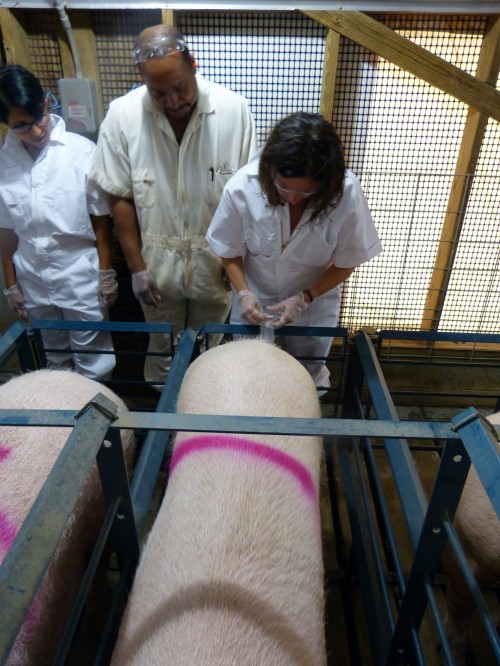 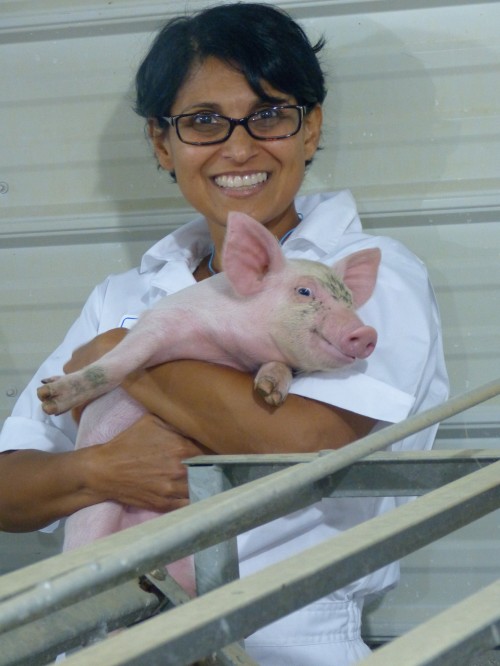 It was all on when I was invited to impregnate one of the females. I want to say they were bemused by the fact that we would step up to do this. But when else would you ever have the opportunity to grasp these new farming fundamentals; such as one boar’s semen can artificially impregnate 30 sows vs. only one sow. The new and advanced method increases production and farm productivity. 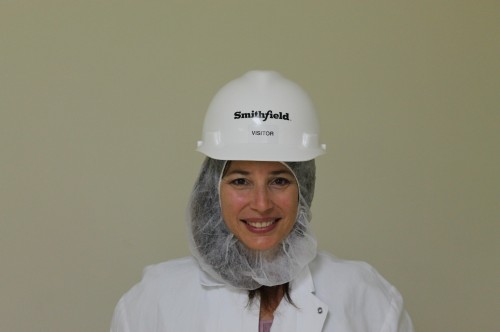 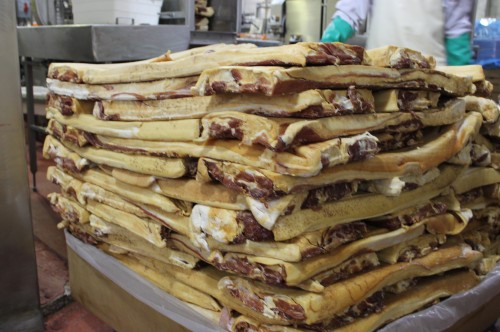 Our guides at Smithfield advised us that the pork industry is a mature one, ergo, demand is holding strong in the U.S. but growing significantly in China as half the world’s park is consumed abroad. My visit in North Carolina provided tremendous insight into an industry I thought I had a good amount of knowledge about; what I learned was exponentially more that I had thought possible. 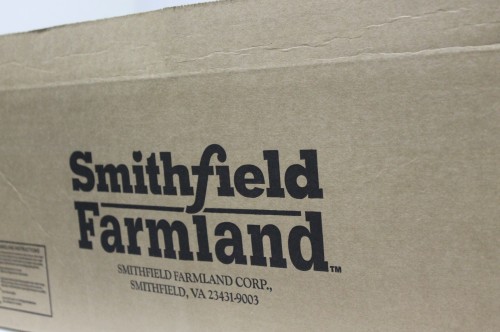 That is not to say that my visit was without emotional obstacles. The team at Smithfield had the challenge of revealing to us how they bring the animals to their final stage of life. I’d lie if I told you the experience wasn’t an assault on all of my senses and emotions. But despite how powerful that reality can be, it wasn’t the horrific event that I had imagined, and it was fully explained to me before I made my final decision to observe this aspect of the business.

I can tell you that there was no flurry of activity or visible heightened sense of nervousness from the animals. Small groups of 6-8 pigs are led up a walkway towards an ‘elevator’ where they are exposed to, and inhale, CO2. The process takes 10-15 seconds, but as a precaution they remain in the ‘elevator’ for 1 minute 50 seconds.

I’d be lying if I didn’t say that I felt very emotional in this powerful moment; I felt reflective for all that I had seen and experienced. While I don’t want to minimize or rationalize it for others or myself, I know it is part of our circle of life. I confronted similar emotions 17 years ago while in Africa on safari. It is never easy to witness the passing of a life; for me it is important to look broader.

In this instance, I also know it was not easy for those that had to take the risk to show us all aspects of their business. I came out of this opportunity with an enormous sense of pride for all of the employees and contract workers I met. And as hokey as it sounds, I felt an amazing sense of American pride; not only for what they do, but for how they were willing to share this information. Transparency can be a risky move and yet it really was the only move. They have and do suffer from bad press; but they wanted to come out from behind the past and show us the present and the future. While I am sure all farms processing facilities are not created equal, these two operations were impressive. And despite all I saw, I remain only a part-time vegetarian.

I was honored and proud to have been in their company and to have enjoyed the meals prepared for me by locally revered chefs (Chef Jason Smith/18 Seaboard and his Executive Chef John Knox; Chef Matthew Register/Southern Smoke; Bravo Top Chef Contestant, Chef Keith Rhodes Catch; and Chef Eddie Wilson/NC State University). 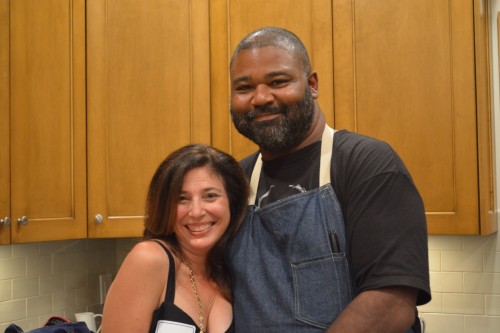 I created this recipe with the intention that the ingredients wouldn’t be difficult to source, nor would it be complicated to make. I envisioned it could be a great meal for those working tirelessly on the farm or in the factory all day. The Italian spices give the dish flavors that blend beautifully to create a slightly sweet stew that compliments the subtle flavors of the pork. The sweet potato lends itself to the local food sourced in North Carolina, which added a hint of local fare for me. It is a one pot, one meal dish that can be made ahead of time. The longer it stews the more developed the flavors. Don’t be daunted by the seemingly long list of ingredients, the stew comes together quickly once all of the ingredients are chopped to size. And by design it is gluten free! 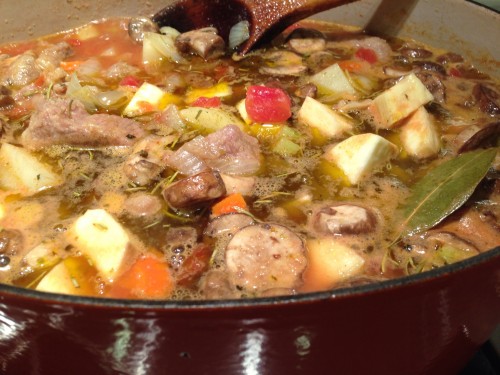 Stir in fresh basil and parsley. Serve warm sprinkled with Parmesan or Romano cheese if desired. 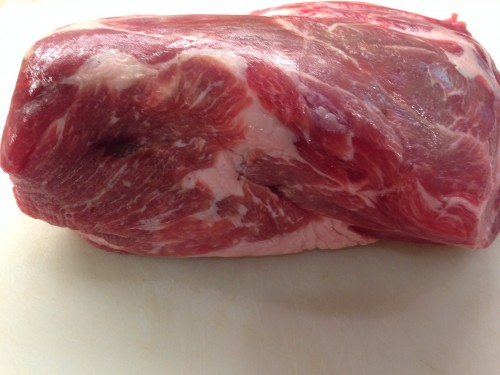 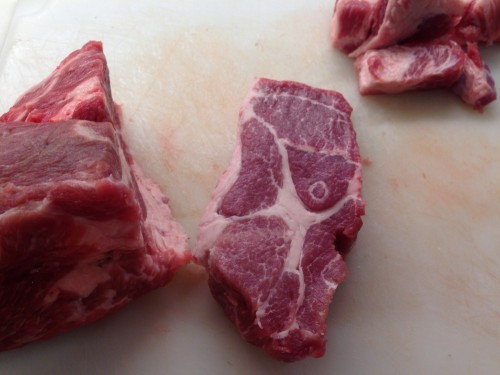 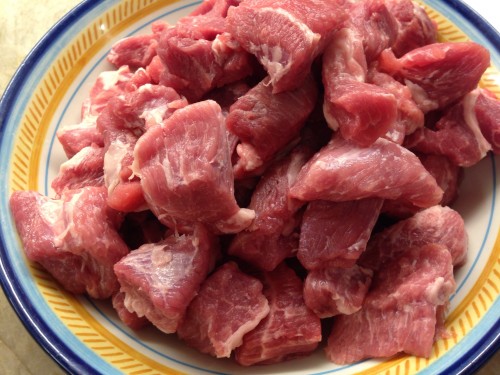 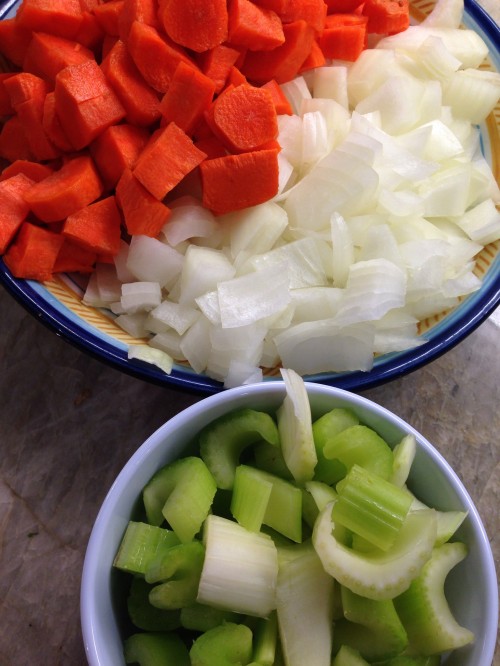 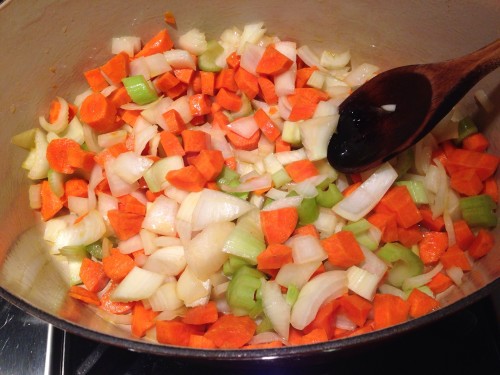 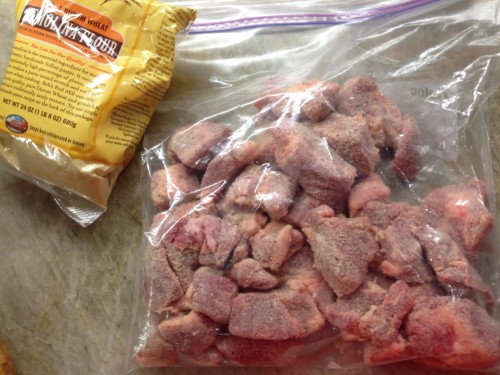 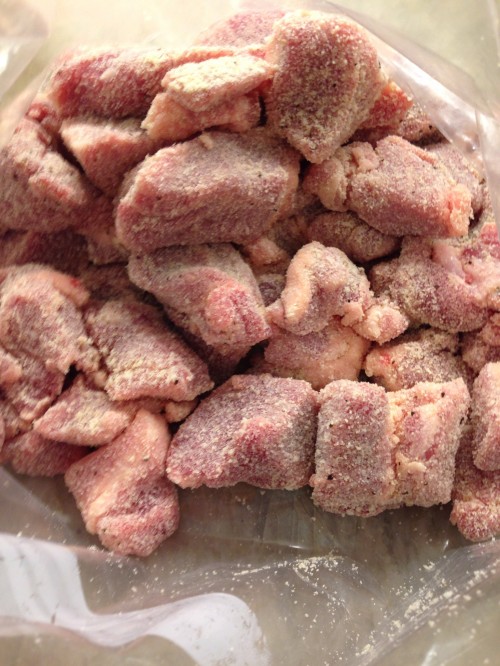 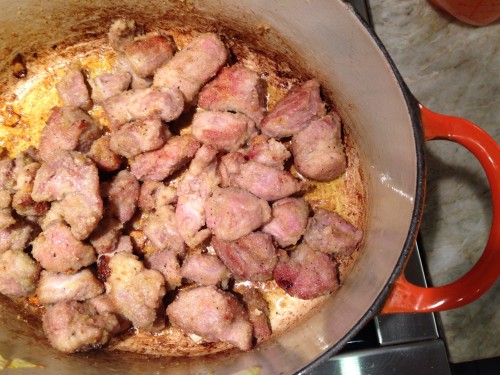 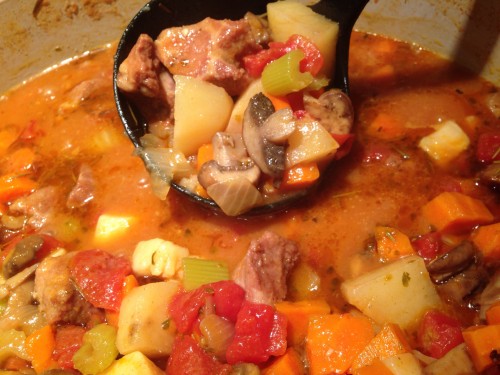 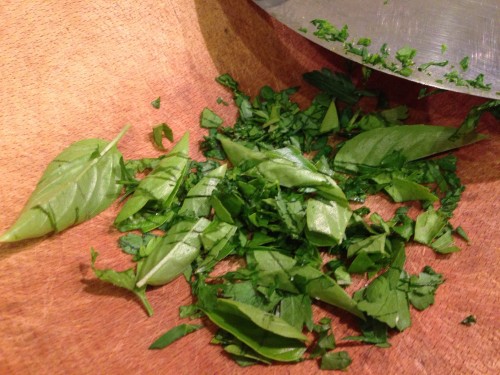 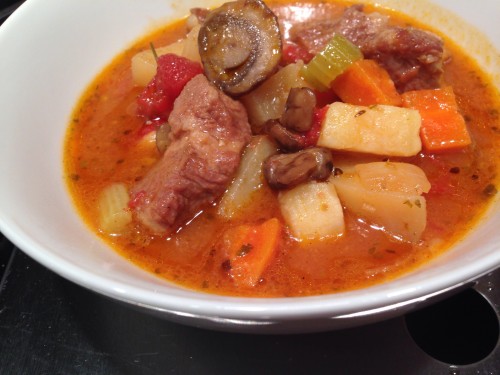 Thank you to all those that made this such a special and educational trip. I came away richer for the experiences shared. 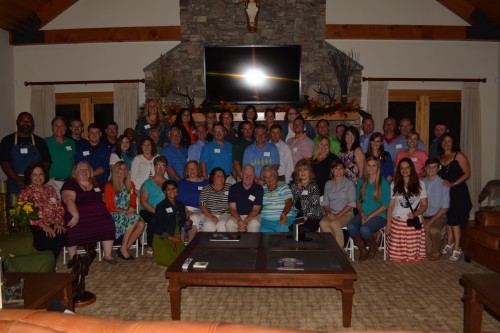 Standard Disclaimer: While my travels were paid for I was not compensated for my time. The views and opinions expressed here are my own.