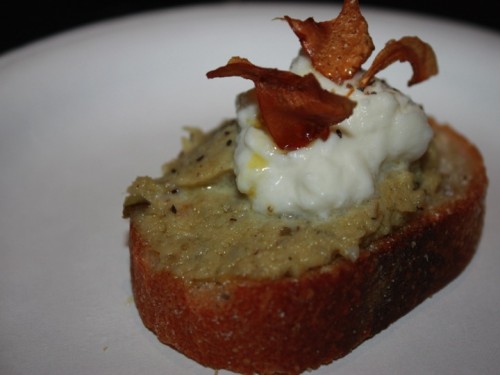 I recently had the opportunity to see Chef Michael Chiarello. I had been to Tra Vigne frequented his store Napa Style and am setting my plan for a special visit to Bottega this summer. He has captivated me on TV and is no less charming in person- what I did discover is that he is a wonderful story teller and that he too has his roots in Southern Italy.

Leading the charge to unearth some really wonderful insights into the life and times of Michael was Table Hopper’s Marcia Gagliardi (yes, another Pisan you can follow on Twitter @tablehopper). And to finish off the evening was a recipe for one of Michael’s ‘bites’ and then a tasting of the recipe paired with some wine from his private vineyard.

There are three videos to this post two which show Chef Chiarello making the artichoke crostini bites and the other from his interview with Marcia when he speaks of how he learned to tenderize an octopus while cooking for the King of Thailand. I encourage you to watch all three as they could quickly become party stories amongst the foodies.

Chef Chiarello’s Tips/Tricks:
1) Select artichokes that are tightly closed heads and be sure to trim away any dark green spots. These will be bitter.
2) He likes to call this one of his master recipes as it is truly versatile. It can be used as an appetizer, as this recipe depicts, or as a sauce for fish, as a pesto for pasta or even as a soup by adding a few new nuances.
3) To make this into a pesto: add 1/2 cup tightly packed (cleaned) basil when blending. As a fish sauce, add a bit of tarragon, for a soup add in some extra broth and cream.

Preheat the oven to 325 degrees.

Working with one artichoke at a time, bend the tough outter leaves backwards until they break (the video shows exactly how to do this). Continue to remove the leaves in the manner until reaching the more tender interior leaves that are at a yellowish green color. Taking a serrated knife, cut across the leaves at the point where the color changes from yellowish to dark green. Trim the stem of its outer layer, then trim the base to 1-2 inches removing any dark green spots. Quarter the artichokes lengthwise and scoop out the purple colored choke. Place the quarter artichokes in a large size bowl, add in the the lemon juice, salt and pepper turning to coat.

Cover with pan with aluminum foil, transfer to the oven, and cook until the artichokes are slightly browned and tender when pierced, approximately 35 minutes. Remove from oven, set aside and cool in the liquid. Remove the bay leaf.

When the artichokes are cooled, place along with the liquid into a food processor, add beans, cheese, lemon zest, lemon juice, salt, and pepper. Pulse until the mixture is chunky. With the machine running, slowly add the remaining 1/4 cup of olive oil and process until smooth.

Remove Burrata cheese from the refrigerator.

Preheat the oven to 400 degrees. Place the bread in a single layer on a cookie sheet. Drizzle with olive oil and sprinkle with salt and pepper.

On a baking sheet, arrange the bread slices in a single layer. Using a pastry brush, brush the bread with 1/4 cup of the oil. (If you don’t have a pastry bush, just drizzle olive oil over the bread.) Bake until golden brown and crisp, approximately 9-12 minutes.

Bake until bread is golden brown and crisp, about 8 to 9 minutes. Spoon the artichoke mixture onto the crostini. Place a piece of Burrata cheese on top (or sprinkle Parmesan cheese), add decorate with fried artichoke hearts. Drizzle with oil and serve.

To follow Chef Michael Chiarello on Twitter @ChefChiarello
Let me know if you loved his method for squeezing lemons as much as I did. I tried it but found it was a bit painful. My aunt’s secret to getting all of the lemon juice out of the lemon is to first roll the lemons on a firm surface to soften them. She then places them one at a time in the microwave for 35 seconds, cuts them open and squeezes the juice out. 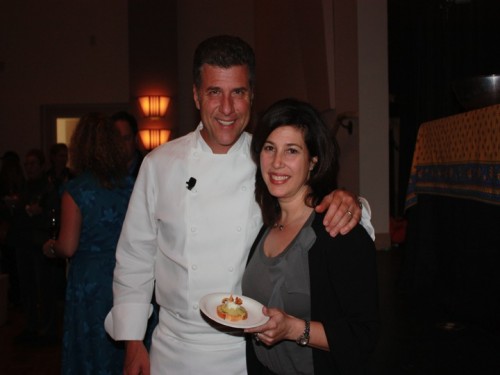