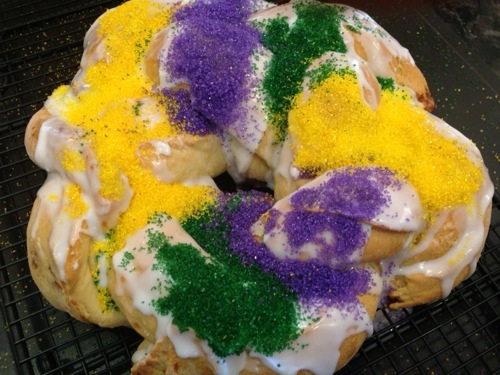 This post is really all about seeing an item on my bucket list to fruition. NOLA. The entire town of New Orleans pulsates with a rhythm of delicious happiness — the people, the music, the food. Oh and the food. The food is truly divine. As you might imagine, I ate a lot of food and photographed it along the way. Since returning home I’ve looked over these photos and each time I do, I can practically transport myself back. 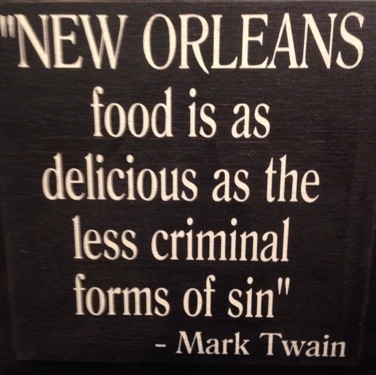 Traveling with friends only made the trip sweeter. Each moment made a bit more special because it was greeted with smiles and laughter. While our days there were few, we maximized every moment. Being the food lovers that we are it was a tour of the palate and my friend Maria took our task seriously. While I could go on about every little morsel, and discovering the first Bloody Mary I’ve EVER liked, I wanted to share my newest discovery. King Cake. This recipe comes to me from the very friends that opened my eyes to the wonders of NOLA. It is a treat to treasure. Or rather, a treat fit for a King. 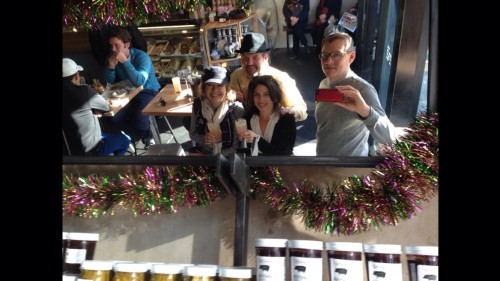 If you’ve never had the chance to feast on such a cake, I can share with you that a King Cake is a frosted oval-shaped yeast dough bakery delicacy, crossed between a coffee cake and a French pastry that is as rich in history as it is in flavor. The King Cake tradition is thought to have been brought to New Orleans from France circa 1870. New Orleans bakeries churn out these lovely pastries between King’s Day, January 6th, and Fat Tuesday, the last day of indulgence before Lent. It is one of the wonderful traditions of Mardi Gras, and IMHO probably the most delicious. Spoiler alert: the cake comes with a hidden baby inside. The baby, symbolic of Jesus, has become a fixture of the king cake (galette des rois in France or rosca de reyes as it’s known in Mexico).

The cake is decorated in royal colors of PURPLE which signifies Justice, GREEN for Faith, and GOLD for Power. These colors were chosen to resemble a jeweled crown honoring the Wise Men who visited Jesus on the Epiphany. In the past things such as coins, beans, pecans, or peas were also hidden in each King Cake.

Like the Biblical story, the “search for the baby” adds excitement, as each person waits to see in which slice of cake the baby will be discovered. While custom holds that the person who “finds” the baby will be rewarded with “good luck”, that person is also traditionally responsible for bringing the King Cake to the next party or gathering. 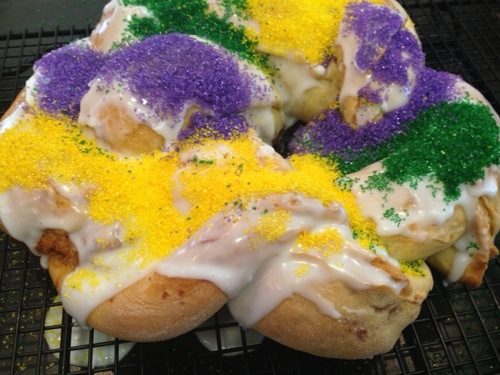 Note: Since this recipe makes two cakes, if you want to play around and make the second cake a little different you can add 1 cup confectioners’ (powdered) sugar, 2 TBS flour, and 1 tsp cinnamon, 2 TBS lemon juice, and 1 tsp vanilla extract, in a bowl and mix until filling is smooth. Later, when about to add the filling melt 4 tablespoons of butter in microwave. Spread the cream cheese filling over the dough, it will be important to leave a 1-inch border along each edge for that it can be properly sealed before braiding and baking.

In a large bowl, melt 1/2 cup butter in the microwave. Add the evaporated milk, 3/4 cup of the sugar, and the salt. Stir until the sugar dissolves. Allow to cool.

In a small bowl, dissolve the yeast in 1/4 cup lukewarm water and stir in the remaining teaspoon sugar. Allow to stand for 10 minutes, until foamy. If the yeast does not foam up, start over with new yeast and sugar.

Add the yeast mixture to the butter and milk mixture. Add the eggs, lemon and orange zest and whisk together vigorously, until well blended.

Whisk in the flour, 1 cup at a time, until you have a thick paste- about 3 cups flour. Then switch to a wooden spoon and continue adding flour and mixing well. Once all of the flour is added, turn the dough out onto a lightly floured wooden board and knead it by hand, hands should be dusted with flour, until the dough is smooth and elastic. (Note: After adding 5 cups of flour I found the dough to be too difficult to stir and had to begin kneading the dough by hand.) Dough will be extremely dry. It may not completely hold together until after it has risen.

Place the dough into a large clean bowl, if it is slightly damp, coat bowl with vegetable oil cooking spray. Turn the dough to coat all sides with spray. If it is dry, there is no need to oil the bowl. Cover the bowl with a tea towel and allow the dough to rise in a warm place until doubled, about 1 hour.

Prepare the cinnamon-sugar filling by combining the sugar and cinnamon in a small dish until it is well incorporated. Or if using the cream cheese alternative, prepare that now.

Melt 4 tablespoons of butter in microwave. Punch the dough down and divide the dough in two. With the first half, which will become your first cake, separate the dough into three parts. On a floured surface roll out each half into a 10 x 15-inch rectangle. Brush each rectangle with half of the melted butter and then sprinkle each rectangle with half of the cinnamon-sugar filling mixture. Roll up along the long end like a jelly roll. Pinch the roll together at the seam, close securely with water if necessary, to seal in the filling. Braid the three rolls together, forming one thick piece. On a parchment lined baking sheet, form the dough into a circle and seal the ends together.

Repeat process for the second cake.

Cover the cake with a tea towel and allow to rise in a warm place for approximately 1 hour (when it rises, the center may close up and it will look like a bumpy “cake”). It should almost double in size.

Preheat the oven to 350 degrees. Whisk the egg white with 1 TBS water. Brush the top of the cake with the egg white. Bake the cake for 20 minutes, until it is lightly browned and sounds hollow when tapped.

Make the white icing: Combine the sugar and milk in a small dish and whisk until smooth. If the mixture seems too thin, add a little more sugar. If it won’t drizzle, and a little more milk, 1/2 teaspoon at a time.

If making the colored sugar, place 1/4 cup of sugar into three separate cups. Put 1 drop of yellow food coloring into one, then, using your fingers, grind the color into the sugar until all of the granules are colored. Do the same using green food coloring, and in the third cup, blend 1 drop of red coloring and 1 drop of blue coloring to make purple.

Allow the cake to cool for a few minutes on a wire rack. If hiding the ‘baby’ push it into the cake. Drizzle with icing and quickly sprinkle the colored sugar in random patterns over the white icing before it dries. Slice across the width of the cake into think slices to serve.

Lean back, close your eyes and enjoy every bite. This cake disappears quickly, so don’t expect leftovers. 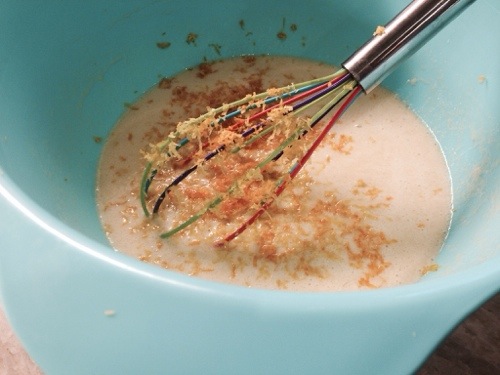 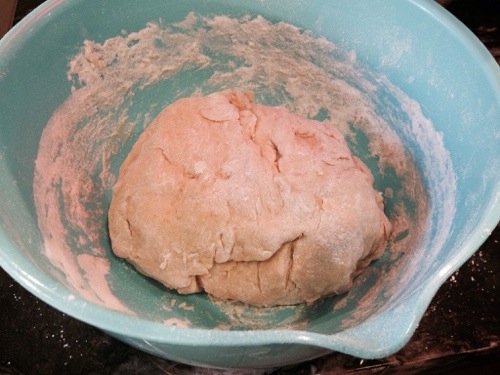 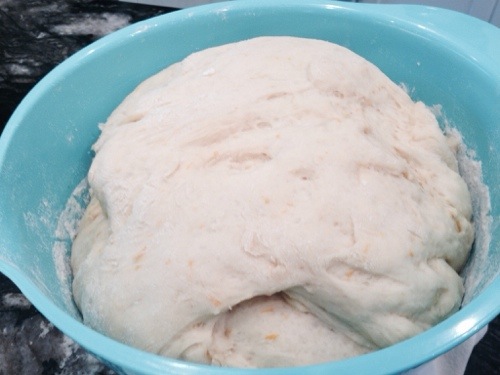 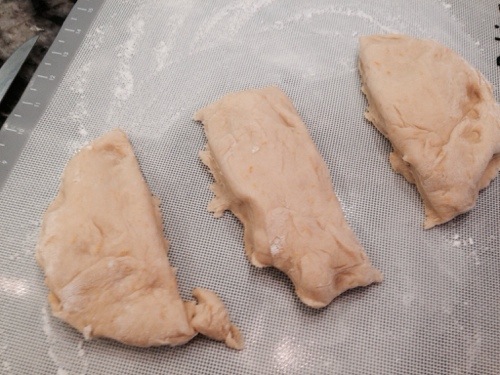 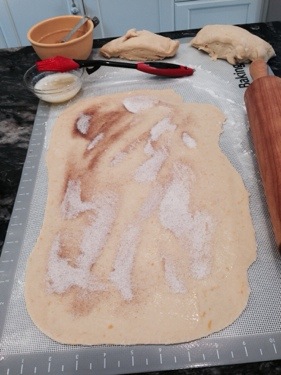 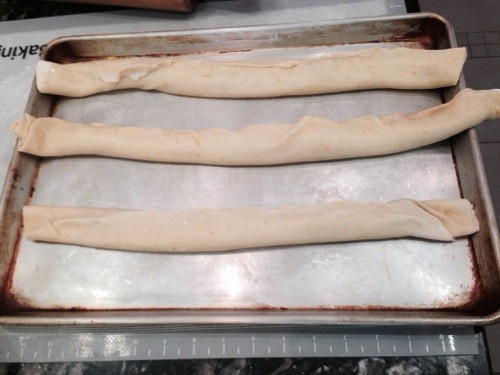 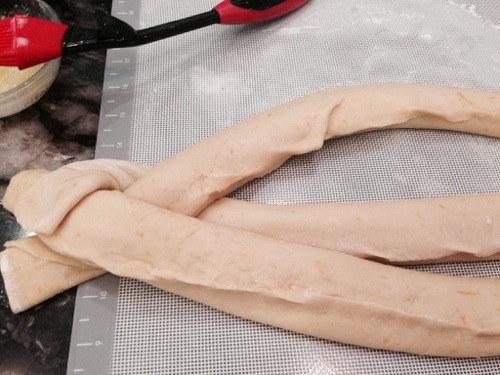 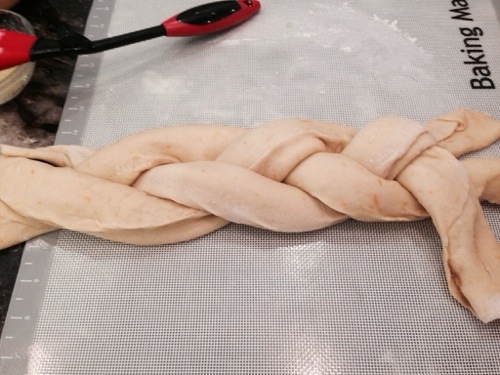 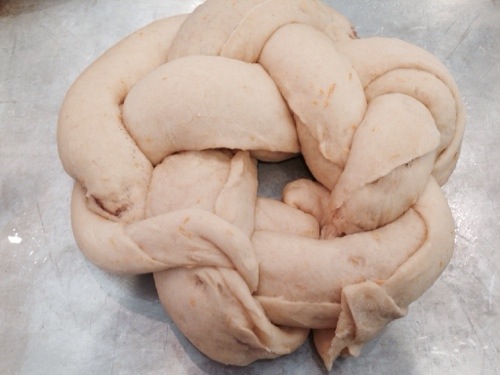 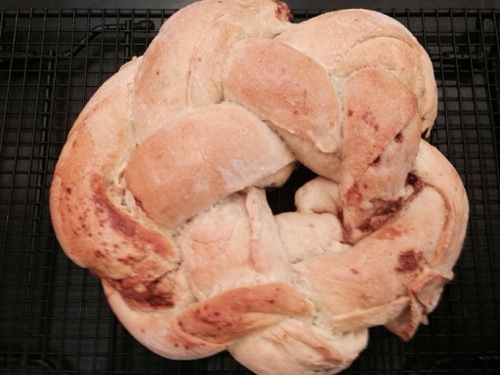 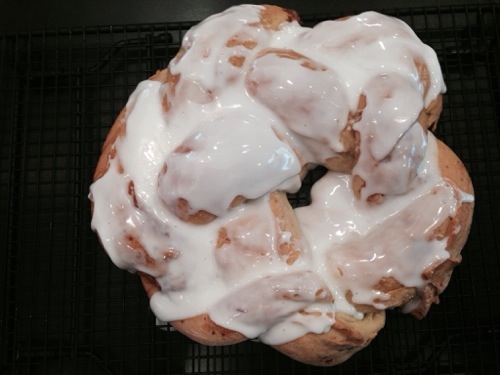 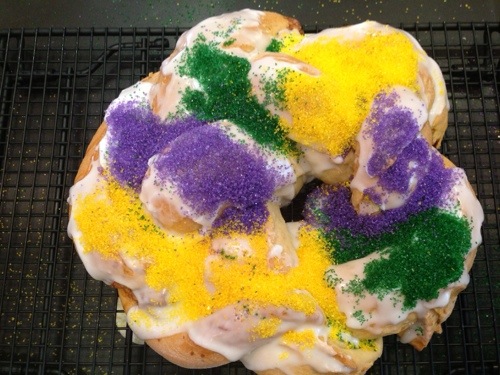 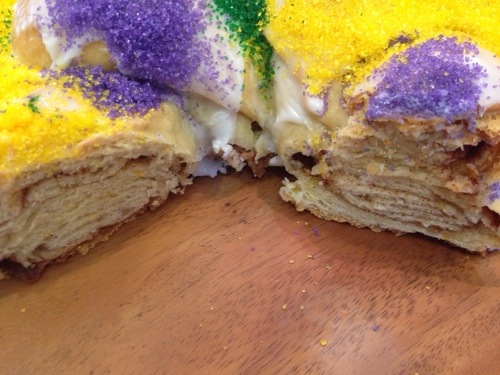 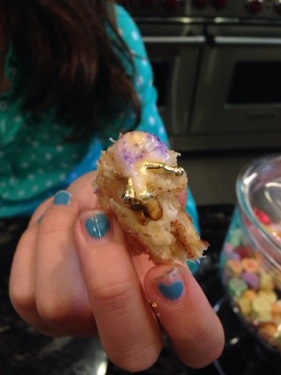 In case you can’t figure out what this messy picture is with the chipped nail polish. It is the semi-frosting covered hidden baby found in the cake by my daughter.

Once you’ve seen this city it is difficult to get it out of your mind. #stillLovinNOLA 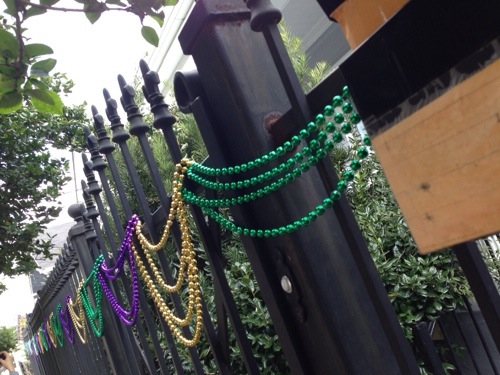 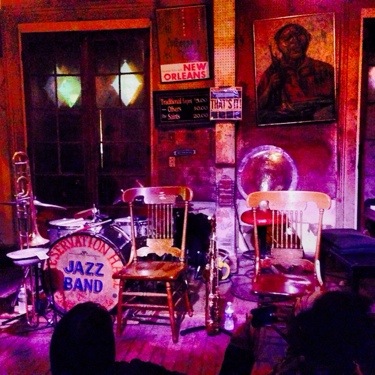 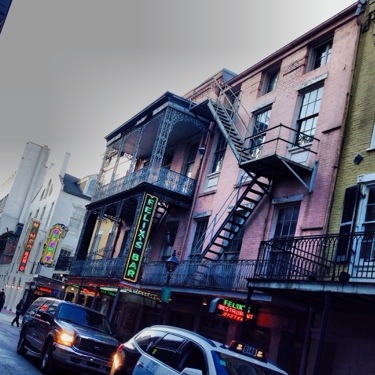 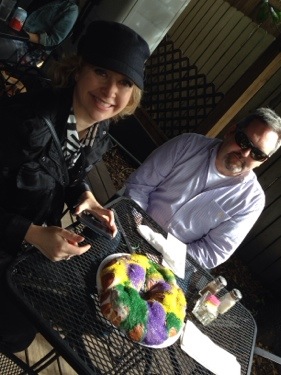