Posted on November 19, 2009
Wherever did the Marsh find the Mallow? As history reports, the earliest recorded “confection” to have utilized the root sap of the Marsh Mallow was a simple recipe of nuts and honey prepared by the ancient Egyptians in 2000 B.C. It is believed that this confection was reserved solely for the enjoyment of Egyptian pharaohs and the Gods they worshiped. 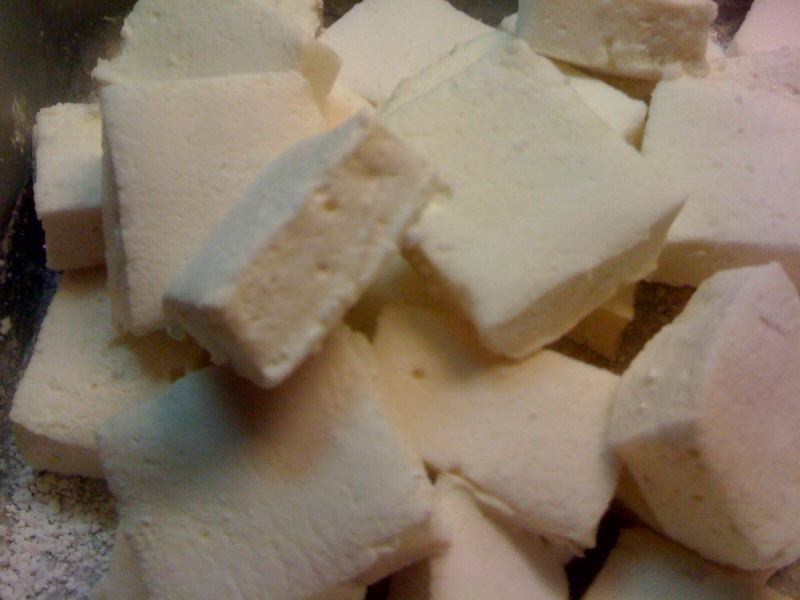 By the early 1900’s, marshmallows were available for mass consumption and began appearing in American five-and-dime stores. Marshmallows quickly became an integral part of American desserts and side dishes, sweet treats (such as ambrosia, s’mores, Rice Krispies Treats) and, of course, as a condiment to hot chocolate.

Americans are believed to be the largest consumers of marshmallows, followed only by the French. Pâté de guimauve is traditionally shaped in the form of long thick ropes or “lanyards”. French confectioners have been known to display these lanyards in beautiful tall glass apothecary jars. Some of the most exclusive Parisian restaurants are said to offer guimauve as a post-dessert, finishing touch to a meal. The lanyards are “snipped with a flourish by the waiter” into small “pillows” at the patron’s table.

I took my first dive into what I used to consider a baking ingredient. And well, my pillows tasted just like the store bought ones only they were square. If that wasn’t enough, I had to up the anti and make the s’more a bit more I-talian. How you ask, with a simple flick of the wrist into the Nutella jar the damage was done…oh wait, and then a splash of chunky peanut butter on top of my home made marshmallows, gently broiled, and slathered onto a graham cracker. The result = sticky fingers, an added increment to my waste line and a nice gooey smile on my face. T’was all good.

With standing or a hand-held electric mixer beat mixture on high speed until white, thick, and nearly tripled in volume, about six minutes if using standing mixer or about 10 minutes if using hand-held mixer. (The hand held mixer does tend to take a little longer and might even need to go beyond 10 minutes.)

In separate medium-size bowl with cleaned beaters whip egg whites until stiff peaks are formed when the beaters are removed. Gently beat whites and vanilla (or other flavoring) into sugar mixture until just combined. Pour mixture into the oiled baking pan. Sift 1/4 cup confectioners sugar evenly over top. Chill marshmallow in the refrigerator, uncovered, until firm, approximately three hours, and not longer than one day.

To remove from pan, run a thin knife around edges and invert pan onto a large cutting board. Lifting up (or peeling back) one corner of inverted pan, with dry fingers to loosen the marshmallow and ease it out of the pan and onto cutting board. With a large knife, or oiled pizza cutter, trim edges of marshmallow and cut marshmallow into roughly two-inch cubes (you can cut them smaller but I love these large oversize pillows of candy). Sift remaining confectioners’ sugar back into your now-empty baking pan, and roll the marshmallows through it, dusting all sides.

Keep marshmallows keep in an airtight container at cool room temperature for 1-2 weeks.

2 Replies to “Guimauve – pillows of the gods”