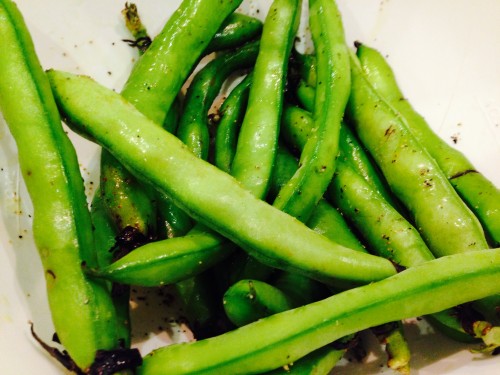 Fava Beans (or broad beans) although very common in Italy are not usual fare in the U.S. While they do continue to grow in popularity, they can be a chore to prepare. Fava beans, when in their pods, look like an overgrown sweet pea. Their taste is richer than most other beans; smoother and richer.

It never fails, I am suckered in each time. During the spring and summer I hunt fava beans out at the farmer’s market and I select a couple pounds of the plumpest, bright green pods I can find. Hand selecting each bean as I diligently run my hand along the exterior of the individual pods to ensure that there are nice fat beans inside. I remind myself that it is important not to go for pods that are bulging, as these are typically older and might have a slightly bitter taste. And while it always seems like a lot of beans when they are in their pods, one pound of un-peeled beans will garner roughly 1/3 cup of favas.

But I digress. Fast forward to that moment when I get home with my coveted glorious bag of fava beans and realize that I have now committed myself to peeling, boiling, shocking, peeling again and then finally cooking the scant ¼- ½ cup yield of beans. Typically I purchase them for my mom, as she loves to make a traditional Sicilian Fava Bean soup recipe that was handed down to her by my grandfather. It isn’t a recipe I would consider complex, but it is one that I always look forward to devouring. She covets them equally. Upon the arrival of the fava beans she guards these pods like gold.

Over the last few years in addition to buying her fava beans she has even managed to convince me to purchase and peel them for her before handing them over for her cookery. But this year I held out. I made a secret voyage to the Marin County Farmer’s Market and purchased a few pounds. I’ve been wanting to experiment with these beauties, so I didn’t divulge that I had purchased any. But like any mother, her antennas were up and without even trying she found out from a friend of mine that I purchased them! It was on. “Oh, I hear you bought some fava beans today,” she remarked. “Did you get some for me?” >my radio silence prevails< “Well not exactly. I was going to try out some new recipe ideas,” I explained. “Humm, so we not going to have any fava bean soup this summer? Or the pork and fava bean dish? Are you sure?” she questioned. “I’ll share my creations,” I say convincingly.

I am pleased to report that success was achieved. No need to go through the typical painstaking multistep preparation process. >drum roll PUH-leze< This is a super simple mind-blowing appetizer recipe. No shucking, boiling, shocking, peeling again and then cooking. Three steps, wash, season and roast! It’s a summer miracle- roasting the pods renders the second outermost skin edible! 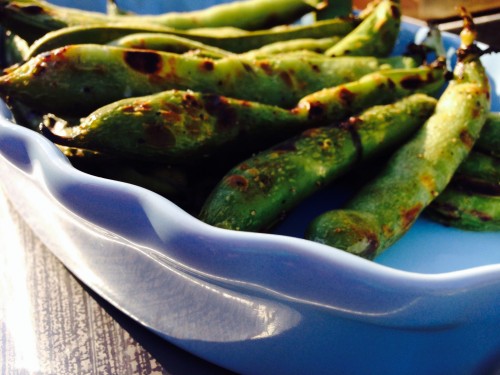 Toss clean whole fava bean pods in good quality olive oil. Season with salt and pepper and toss on the upper most level of the BBQ. Cook over medium heat for 5-6 minutes on each side. The exact cooking time will depend on the size of the pod. When the pods loose their crisp firm form and become slightly browned and wilted they are cooked. Place the roasted pods on a plate or in a shallow bowl and sprinkle with kosher salt or sea salt. Encourage guests to eat them out of the pods similar to edamame. The skin is where all of the good flavors reside so it is I wouldn’t recommend pre-peeling them. However, if opting to go this skinner route then add a nice sprinkling of kosher or sea salt to the naked beans.

No BBQ? Well no problem-o. Spread the fava bean pods onto a baking sheet, in a single layer, and roast at 450 degrees for approximately 25 minutes, turning once half way through the total cooking time. Cook until wilted and tender. 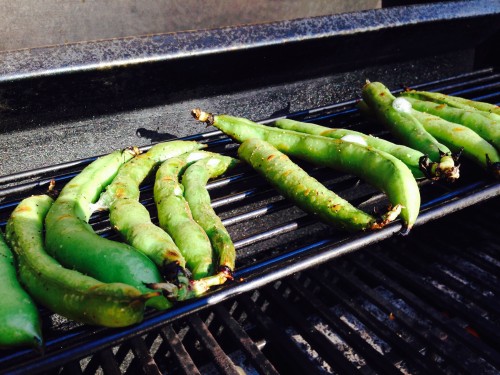 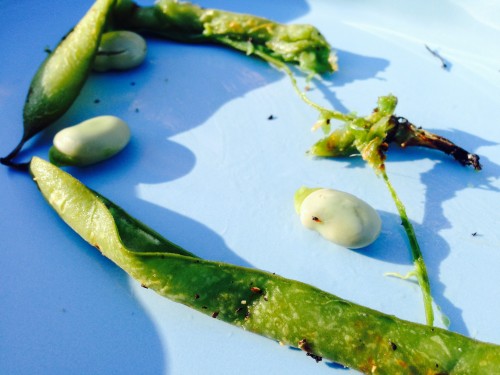 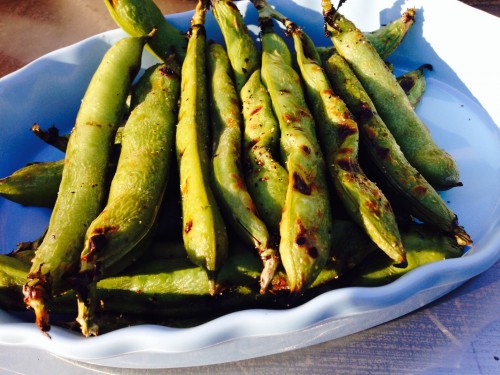