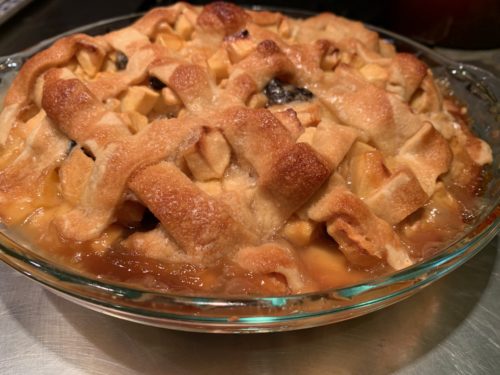 After the world was turned on its head, the world then stood still….for a very, very long time.

We are only 60 days into lockdown and I vacillate from the feeling that every day is a blur to there are some really amazing great memories we are creating together. There is plenty of time for deep reflection and undeniably plenty of ups and downs as we all have our days where we feel a bit less positive. We are keeping focused on the long game, we know we may not get out anytime soon, but at least we are finding ways to enjoy ourselves with cooking, baking, binging shows, memes and long walks with or without our old hound dog.

One of my recent projects was to peel, core, and chop some apples that we had in surplus. I had thought that I would then endeavor to make my Aunt’s apple cake, but I was short on flour and thought it best to save it for another project. So I quickly moved to plan B which was to make an apple tart cherry pie with a crust I had already made in the freezer.

This recipe is a riff on my fig crostata from a few years back. Since I know that shortcuts are always good to have, if you are limited on time or don’t really want to put maximum effort into this project, then you could get a store-bought pie crust and skip the frangipane recipe. If making the entire recipe from scratch then start with the frangipane recipe first, the crust recipe second and then the pie filling.

The way the filling comes together for this apple pie is a nice change-up from the traditional toss of apples, sugar, and cinnamon. In fact, this recipe has no cinnamon! Shocker, I know. The tartness of the apples, when combined with the stovetop caramel-like sauce, is a match made in heaven. The dry tart cherries add a nice juxtaposition of texture and visibly shimmer like rubies in this otherwise golden-hued pie. 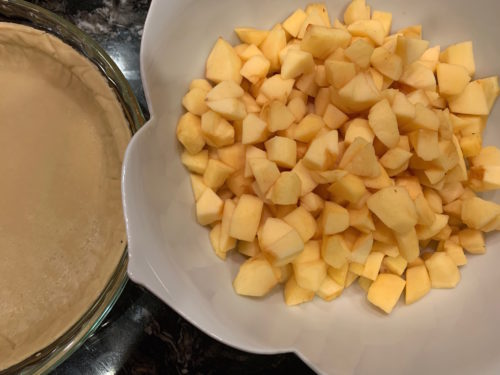 There are three ingredients: salted butter (yes you read that right, SALTED butter), plain all-purpose flour, and a little bit of water. That’s it. The recipe is so easy, do it twice and you’ll remember it by heart.

Preheat the oven, or toaster oven, to 350 degrees. Spread the almonds evenly on a baking sheet and place them in the oven. Roast them for about 10 minutes, or until slightly toasted and fragrant. Transfer to a plate and allow to cool to room temperature. In a food processor, combine the cooled almonds and the sugar into a food processor and process until finely ground. Add the butter and the egg and continue to pulse until well-combined.

Note: To store the excess frangipane, divide into four equal parts, wrap each tightly in plastic. They will keep in the fridge for a couple of days, and up to a month in the freezer.

Preheat oven to 425 degrees. In a medium-large saucepan, melt the butter. Stir in flour to form a paste. Once the paste consistency is achieved, add water and sugars, and bring to a boil. Then reduce temperature and allow the mixture to simmer until thickened.

Place the bottom crust in your pan, if using frangipane, add an even layer of it on the bottom of the pie crust. Then fill the crust with apples, mounded slightly.

Cutting thin strips of dough either with a knife or ravioli cutter to loosely weave into a lattice crust for the top of the pie, and then, crimp down edges to seal and crimp the edges or pressing the tines of a fork around it to create a pretty pattern. Next, take the sugar and butter mixture and slowly pour it over the crust, so that it does not spill beyond the pie dish.

Bake 15 minutes in the preheated oven. Reduce the temperature to 350 degrees and continue baking for 35-45 minutes, until apples are soft.

In a food processor, combine all ingredients. Once processed, begin to combine by hand into a cohesive ball until all of the dry parts are incorporated and it is a solid mass. Divide into two rounds, wrap each round in plastic and refrigerate. After 30 minutes, remove the dough from the refrigerator and unwrap it.

If the dough has been refrigerated longer than 30 minutes allow it to warm up so that it will roll out easier.

To improve the integrity of the dough it is important to roll it out a few times, folding it over itself. This will allow the dough to continue to become smoother and more pliable. Liberally flour your work surface. Use enough flour so that the dough doesn’t stick to the surface or the rolling pin. Place the dough on the board and flour the top of the dough liberally.

With a rolling pin, roll the dough out to an elongated rectangle. Pick up the pastry brush, brush off the excess flour from the top of the dough. Pick up one end of the rectangle, fold it 2/3 of the way in. Brush the flour off the newly folded section, then pick up the other end and fold it over that section. The dough is now neatly folded into thirds. Do not worry if the dough cracks or breaks. It is important to brush off as much flour as possible between folding so that additional flour is not unnecessarily trapped in the dough.

Repeat one or two more times as it is important to working the dough a little bit to build the strength so that it is not so fragile when rolling it out later. This is especially important when making a lattice top pie crust. Create two balls out of the dough and return to the refrigerator for 30 minutes longer.

Roll each round into a circle that is 2-3 times larger than your 9-inch pie plate. 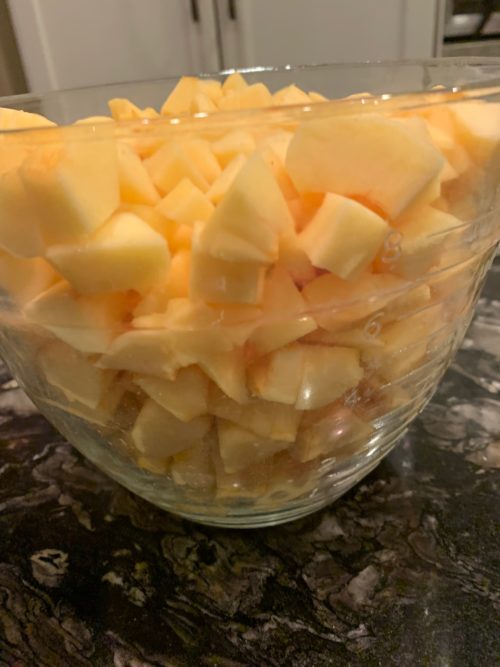 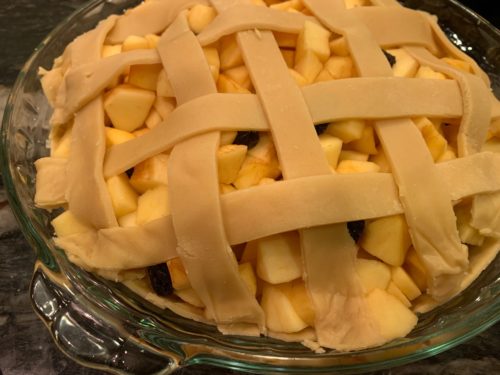 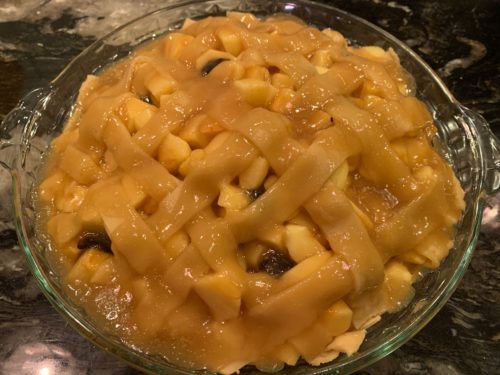