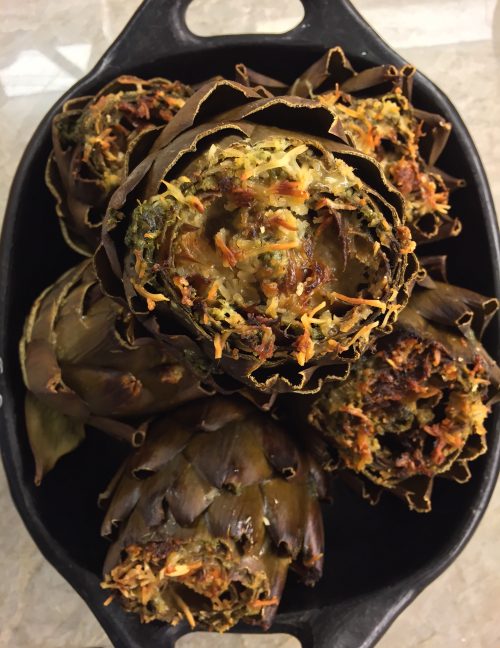 Some weeks you just can’t hide from your past, it finds you. That’s not necessarily a horrible thing; it is just a fact. This was in fact an unexpected theme throughout my week. It was subtle at first, hardly noticeable, until I attended my son’s open house. I know that it may sound odd, but when I reflected back I realized that three things had rekindled my past. A photo from 2014 that appeared in my FaceBook memory feed transported me back in time to the avocado incident. This mistake and all of the complications it brought with it was in many ways the primer for what was to follow a few years later. An abundance of memories came flooding back into my consciousness.

Upon attending Secondo’s open house, I casually flipped through his work when I came across his adapted poem and I was again reminded of my battle with cancer. On most days of the year it’s something I can put aside, but I know from glimpses into their homework that it is a weight my children carry with them that seeps out into many aspects their lives. While I try to live a life that assures them that is in the past, to convey with my actions that all is well, that I am fine, I do see their stolen glances and need for reassurance. Their pain and worry is disguised in a good night kiss, written in their poems/research papers and surfaced in stories they tell. And while I made it past the FaceBook memory, the poem I read at Secondo’s open house made me take a deep breath, or maybe I was holding my breath.

I am from Golden Gate fog and feeding my dog,

From dihydrogen monoxide and fur,

I am from my room.

Dense air, with desk and chair.

I am from the oak trees,

I’m from swordfish and video games

From Mati and Tobia

From “knock it off” and “sit up straight”

I’m from my lord and savior,

Death of loved ones.

To those who dispersed,

The cruise along the Mediterranean Sea

A tranquil escape from responsibility

A brief moment of peace, in memory I weep.

It was remarkable, I had almost made it through this week with strong emotional undertones, and then, much to my frustration I was asked to write a response, a couple of paragraphs, to my son’s science in the news report…..at 10pm on a Thursday night! It had been a long day, long week, and I was tired. I opted to take it with me to bed and read it there. I was undeniably annoyed. Entirely to my surprise, the paper was about three very important topics to him – my breast cancer, my mother’s diabetes and his late great-grandmother’s Alzheimers. I was stopped cold in my tracks. He was carrying the weight of the universe on his shoulders. I cried. Cried for all the good in his soul, his love for those around him, his desire to learn how to remove these illnesses from the roster and his ability to tie them into one well-written document in a way that was articulate and relatable.

Most days I wonder if I make a difference. The teenage years are challenging on parents and children. He is often the quieter of the two children and often times more difficult to gauge. To know that he cares well beyond what he shares with me in conversations and that he is reflective of the world around him and able to cope through his words to work on those things that he struggles with is something I couldn’t be more proud of.

The combined sum of these three things reminded me, on the heels of Mother’s Day, about how lucky I am to be their mother and how blessed I am to be here for these moments, even the ones that I am seemingly too tired to cope with but somehow manage to.

There is not putting lipstick on a pig, this is a window into my soul. Feeling emotional and rejuvenated I wanted to get back to creating fun food. It’s something Prima and Secondo always appreciate. This isn’t a very time consuming recipe, which is what makes it such a great weeknight recipe. 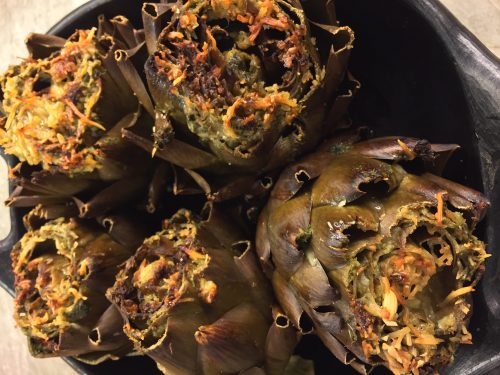 Use two of the lemon wedges to run lemon juice over the cut portion of the artichoke to prevent it from browning. Spread open the petals and rub a full clove of garlic into each artichoke. Add the parsley and ¼ cup Romano cheese, pressing it down into the leaves, and in between the petals.

Bake for 1 hour and 20 minutes, for large artichokes. For medium sized artichokes, bake for 1 hour. Remove from oven and allow to rest for 10 minutes before removing from foil. Place on a warmed plate and drizzle with liquid from the foil packets. 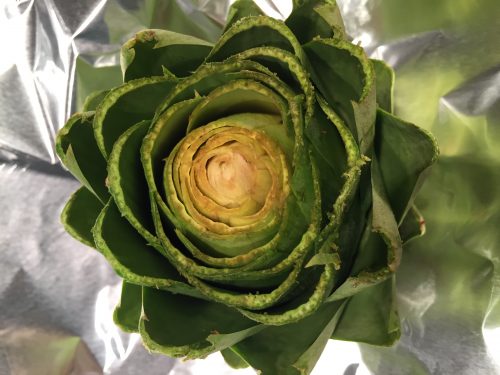 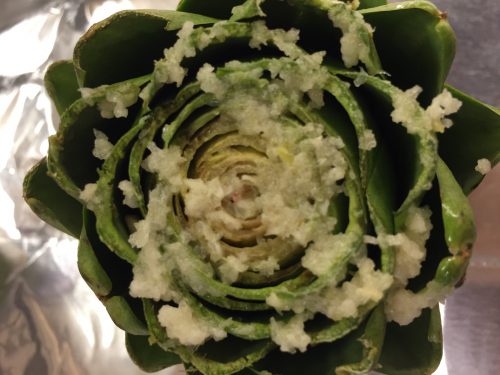 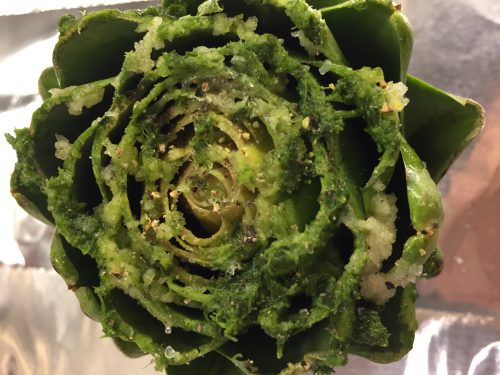 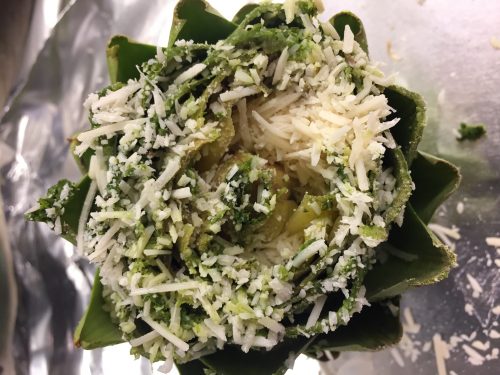