When I think of Neverland I am transported in time to when I was a young girl of 8, sitting on her grandfather’s lap, eagerly lapping up every single word of Scottish novelist and playwright, J. M. Barrie’s, Peter Pan. The live theatrical performance put in the 360 theater was truly an experience worth savoring. It was filled with magic and whimsy, laughter and imagination. And as the British would tout, “It was lovely.” 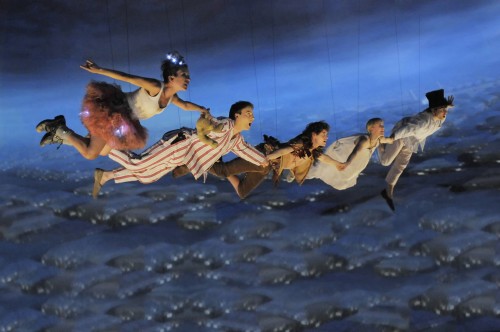 The flight over London proved a memorable moment for me as an adult, as I relived my childhood. Playwright Barrie is genius, capturing the childlike sense of joy and mischief that captivated me, oh so many years ago. I left with a greater sense of childhood, one which can be easily forgotten amidst a heavy work schedule and endless activities with the little ones out of school. I was thankful for the opportunity to remember all the antics of Peter Pan, The Boy Who Wouldn’t Grow Up, and his arch nemesis, Hook, and devoted pixie, Tinker Bell. 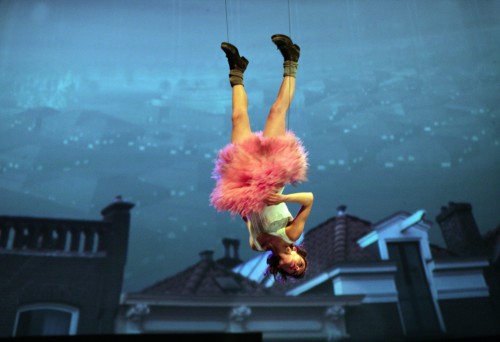 I encourage you to go and rekindle your inner child and while your imagination runs wild- perhaps a nostalgic cup of cocoa? Often mentioned during the play, I couldn’t resist the recommendation of Actress Shannon Warrick who plays Mrs. Darling. We met after the show and I asked her for her thoughts on a Pan-like food. She remarked, “Well it must be cocoa! We talk about cocoa the entire performance and then back stage we eat marshmallows – it would be perfect for your blog.”

She was spot on! And to up the anti, this is one of my coveted recipes for true yummy-ness in a cup. 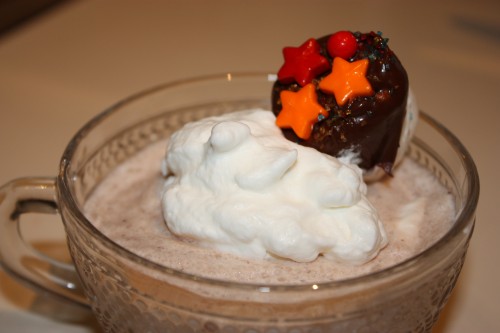 Marshmallows with Hundreds of Thousands Ingredients

In a small-size microwave safe bowl, heat the milk chocolate, stirring every 15 seconds to make sure chocolate does not burn. When chocolate is melted, take marshmallows and dip top of candy in chocolate and then quickly dip in the sprinkles.

Note: Large sprinkles do not melt as easily in the chocolate and are much easier to work with when dipping the marshmallows.

Take 1/2 cup of milk out of refrigerator and bring to room temperature.

Chop the chocolate into small pieces and place in an microwave proof bowl, stirring every 30 seconds until melted.

Add the cocoa and sugar, stirring constantly until thoroughly blended.

Slowly add 1/2 cup of the milk and stir until smooth.

Let the mixture sit and cool completely until it is room temperature.

Place the cooled chocolate mixture, remaining cup of milk and the ice in a blender. Blend on high speed until the mixture is smooth and slushy.

Pour into a wide mouth glass or cup and top with whipped cream, marshmallows and/or chocolate shavings. Suitable for eating with a spoon or a straw.

More about the play…

In this production of PETER PAN:

• 12 projectors, delivering 360 degree projection
• 400 square miles of virtual London were rendered
• The world’s first fully 360 degree projected movie for live theater performance
• The tent, which stands 100 ft high was shipped via boat, 6,000 miles from London to San Francisco.
• 100 computers took 4 weeks to create the images – it would have taken 8 years for a single computer to render

A few of my favorite Peter Pan quotes:

Second to the right and straight on until morning.. (location of Neverland and corresponding stars on the chocolate dipped marshmallow in the photo)

To live would be an awfully big adventure.

Your saving my life, what a great thing to do.

When the first baby laughed for the first time, its laugh broke into a thousand pieces, and they all went skipping about, and that was the beginning of fairies.