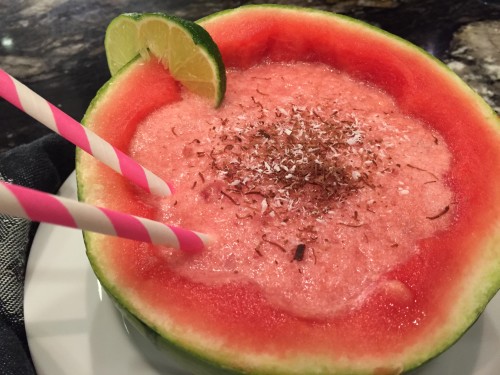 I originally posted this recipe last year. It is one of my daughter’s favorites, as she will often ask me to make this ‘vacation drink in a bowl’ nearly every week during the summer.

When I think of watermelon I can’t help but think of her and about the Mt. Shasta Blackberry Festival. For the last 8 years we have attended the Blackberry Festival, which always falls on Labor Day weekend. This same weekend also happens to be my son’s birthday weekend. >no jokes please, yes I was in labor on labor day weekend!< This festival has become an annual tradition as it offered good ‘ole fashioned fun – potato sack races, water balloon tosses, the three legged race AND the coveted watermelon eating contest. The ambiance is perfect — a park and large grassy field serve as a backdrop for Frisbee playing, fancy hoola-hooping and tag, while local bands up on stage entertain the hundreds of on-lookers. Rotary club members sell commemorative t-shirts, blackberry pies, blackberry ale and some all American fare.

Without a doubt the Blackberry Festival has been a Labor Day Weekend staple for our family, however this year the one glaring activity missing was the one the one competition that we talk about all year long…the watermelon eating contest. Over the years, my kids have perfected their technique. My daughter, the eldest of my two children, developed the winning strategy, which she then shared only with one other person, her younger brother. Since they didn’t compete against one another she wanted to make sure he had the tools required to win his gender/age division. Needless to say, these two ringers have taken first place for their gender/age for the past 6 years.

This past weekend, when we realized the contest wasn’t going to happen, we offered to host our own mini-event at home post-festival, but the response was underwhelming. They didn’t really want to compete against one another, the fun was the challenge of taking on strangers to see if there was anything new to learn.

In tribute to one of our favorite days of the year, I am sharing this recipe for my Watermelon Refesher, in hopes that we can inspire our friends at the Rotary Club to bring back the contest next year!

This beautiful blend of juices evoke the taste of those long nostalgic summertime days. Happiness in bowl. 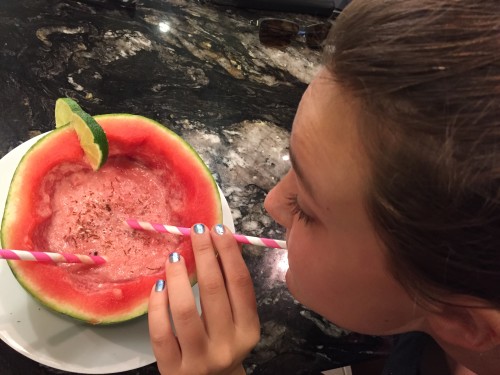 Slice watermelon in half and using a spoon scoop out meat.

Note: To be able to use watermelon rind as the bowl to serve your watermelon drink, it is best not to remove melon to far down in your ‘bowl’ and to make the scoops you remove look aesthetically pleasing. Leaving a small pink ¼-inch boarder of watermelon around the rim is recommended.

Arrange on a parchment-lined backing sheet or in the largest container you can fit in the freezer. If layering watermelon, separate layers with parchment paper. Freeze for approximately 4 hours.

Drain off any excess juices collected at the bottom of the watermelon bowl and set aside. Cover the watermelon halves with parchment paper and refrigerate until ready to use. Chilled bowls are the best because once the juice has been devoured, there is melon to eat! Remaining juice can be used to supplement coconut water or just enjoyed on its own.

Remove watermelon from freezer and add to a blender along with lime juice, coconut milk, coconut water, salt and maple syrup (if using). Blend on low until smooth and creamy. If the mixture has trouble blending, add a scant amount of coconut water or alcohol; too much liquid will make the consistency too thin. If making a cocktail adding and blending ice into the mix is a nice touch.

Taste the mixture before serving and adjust as needed:

Serve in empty watermelon rinds or chilled serving glasses. Garnish with a wedge of lime and a sprinkle of chocolate shavings.

Makes 2 large portions. Leftovers can be put in popsicle molds and frozen minus the lime garnish. 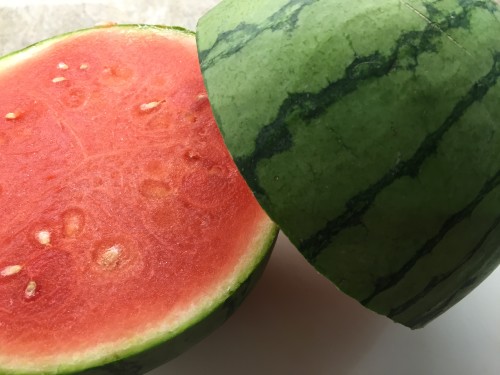 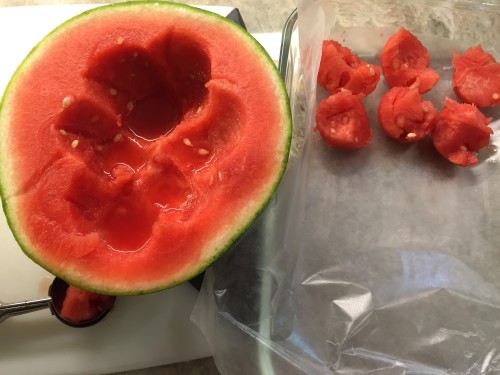 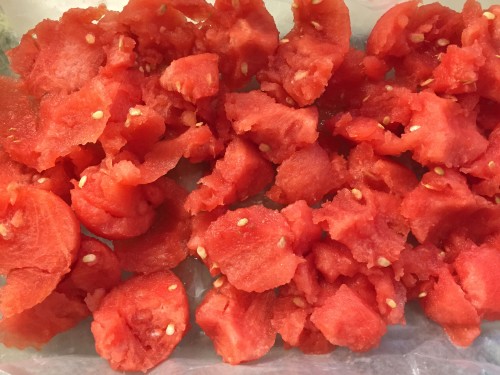 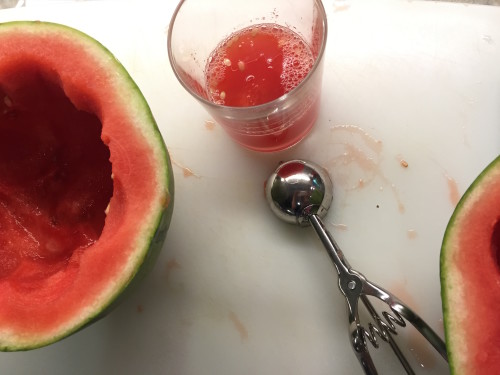 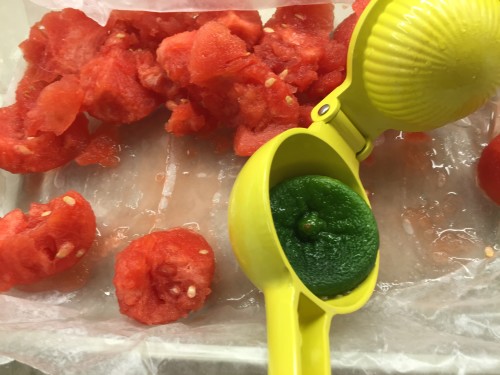 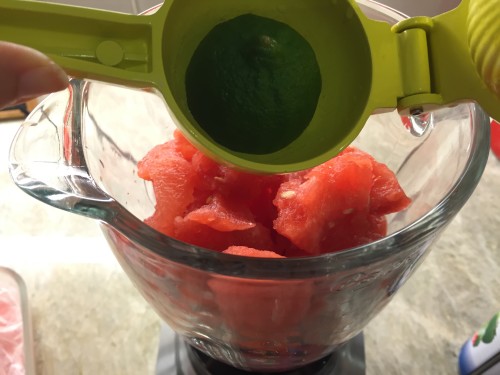 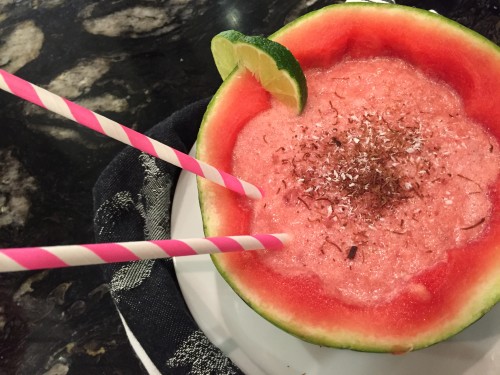 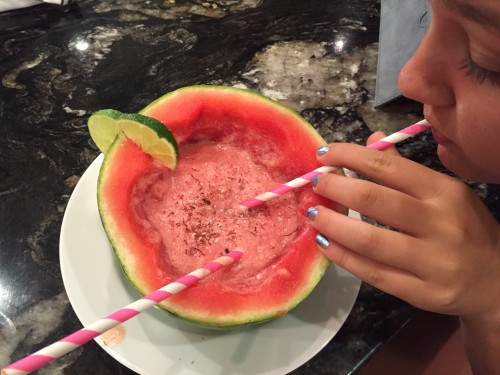 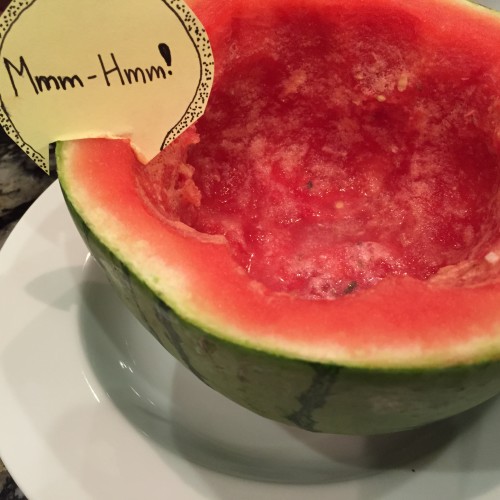