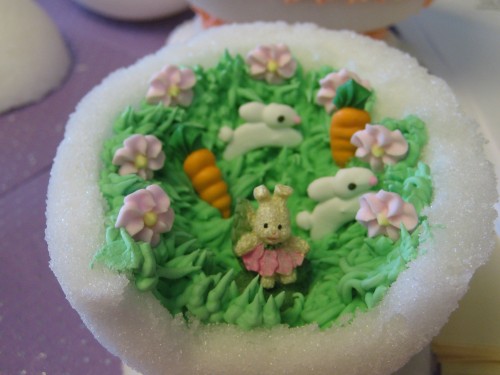 Sometimes when I play with food, it is not about the consumption, it is about having another type of an artistic outlet. These are the sweetest eggs you’ll never eat; ergo the perfect gift for kids that have been on an endless sugar overload. To see a little one’s eyes light up when these treats comes into their view is worth all of the fuss. They make a lovely keepsake, and I know I fondly recall the one I received when I was seven. 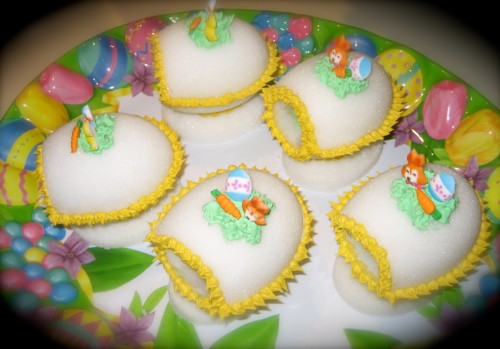 To make a sugar egg, you will need:

Pastry bags and tips for decorating the egg

toys or pictures to display inside the egg

coconut tinted green or Easter grass to put inside in the egg, unless you want to use icing like I did

thin sheet of flexible plastic (found at craft store, it is like a sheet of paper)

gift box for transporting the eggs to their final destination and for later storage (optional, but recommended)

Whisk the egg white until it is frothy. If you would like to color your egg, add the food coloring to the egg white and mix well. It is much easier to evenly distribute the color when it is first added to liquid. In a large bowl, whisk together the granulated and powdered sugars so they’re evenly mixed.

Pour the egg white into the sugars and begin stirring. It may seem like there’s not enough liquid, but continue stirring. Gradually the sugar will become more moist and eventually it will have the consistency of damp sand. You want the sugar to clump together if you squeeze it in your hand, but avoid adding additional liquid and making it too wet—that will just increase the drying time.

Once your sugar mixture is ready, start filling your egg mold. Scoop the sugar into the mold and pat firmly down, packing it in. You want the egg to be smooth, so press down on the sugar to prevent any small gaps or cracks from forming. If you have excess sugar and want to make more eggs, keep it in a bowl and place a damp paper towel directly over the sugar to prevent it from drying out. If you are using an egg base mold, fill it at this time.

Using the top of a large knife to carefully scrape across the top of the mold, removing any excess sugar. The eggs should have a smooth, even top that is the same level as the mold when finished. Do the same for the egg base, if you are using one.

At this point, the egg halves need to dry out a little before you can use them. Let them sit at room temperature for about an hour, or to expedite the process, place them in a 200 degree oven for about 25 minutes.

Once the eggs have started to set, they need to be hollowed out. It is important to do this when the outside is set enough to hold up, but the insides are still soft. Once the egg has fully set, it cannot be reshaped! There are two ways to make the panoramic window. One is to shave off a portion of the egg to make a vertical display- that has a “window” cut into the side. Alternatively, the eggs I made I were done horizontally, so I shaved off the the front end of both egg halves.

Pipe a small amount of royal icing into the bottom portion of the intact egg half. This is to anchor everything else you add. Add a layer of green-tinted coconut, Easter grass or green frosting, if desired, and press gently to adhere into the egg. Now create a scene inside the egg attaching the decorations with a little icing. Begin to add toys, pictures, small candies, or sugar decorations. It is easiest to add a dab of royal icing to the back or bottom of your decorations to help them stick.

It is now important to measure a thin piece of viewing plastic; it does not have to be cut perfectly as it will be covered with frosting. Pipe a thin line of royal icing around the lip of the bottom half of the egg. Press the top half down onto the bottom, making sure that they line up evenly. Run your finger around the seam where the eggs meet to remove any excess frosting. You want to do this right away so that it will not begin to harden into unsightly shapes. Allow the egg to sit for about 30 minutes, until the frosting has hardened enough to move the egg without damaging it.

Pipe a decorative border around the seams where the two egg halves were joined together. Then taking the plastic ‘window’, pipe a decorative design, such as star tipping, around the opening of the window, to better frame the scene inside and to hide any uneven edges. I usually do not pipe a border on the very bottom of the egg, as this is where it will rest in the egg holder. If you are not using an egg holder or have alternate display plans for your egg, decorate the entire thing.

If you have frosting flowers or other decorations, now is the time to put them on the outside. Use a small dab of royal frosting to secure them to the egg. Add leaves, stems, or any other decorative touches you desire.

If you are using an egg base, pipe some royal icing into the base to secure the egg. Once the outer icing is set, your egg is complete!

To save it, wrap it carefully in paper or plastic and store it in a box in a safe place. Do not refrigerate the egg and do not attempt to eat it! Stored properly, your egg can be saved for many years. 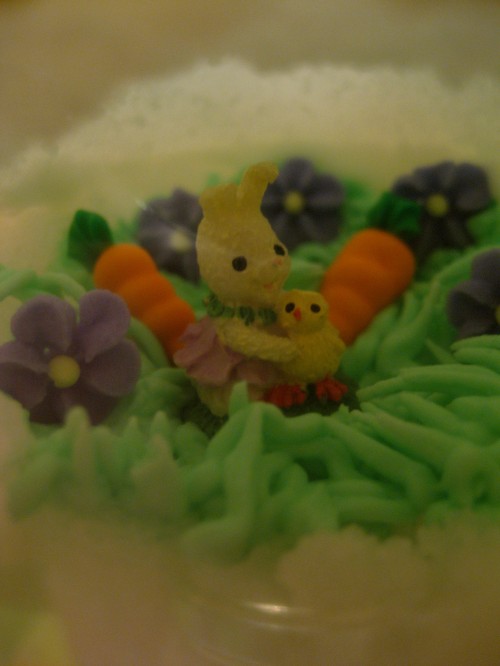 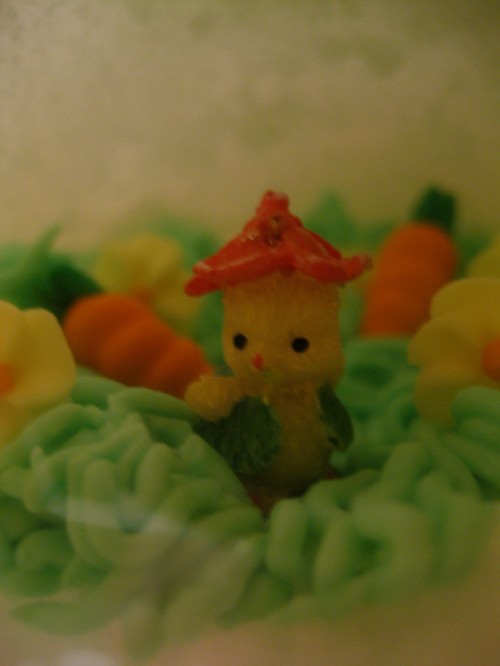 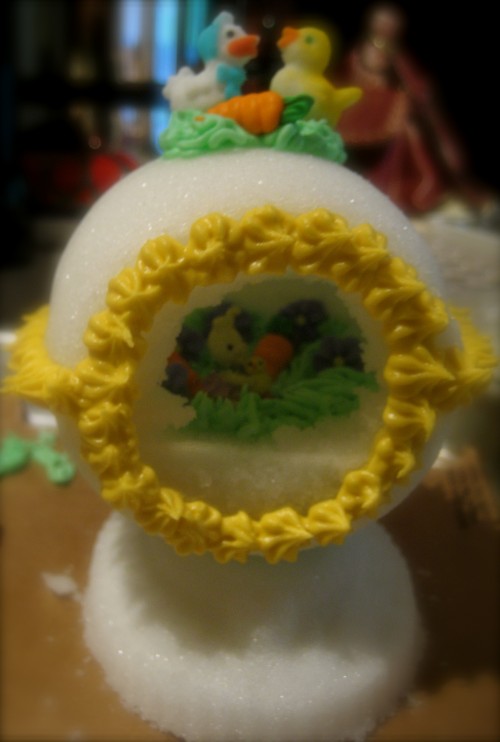